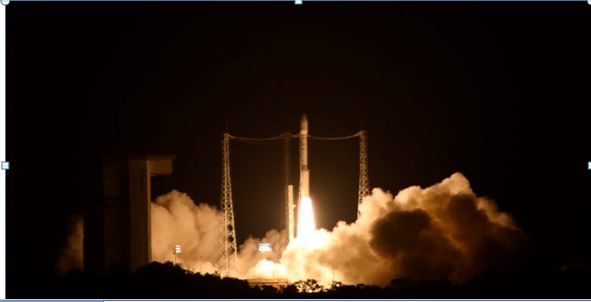 ESA’s LISA Pathfinder lifted off earlier today on a Vega rocket from Europe’s spaceport in Kourou, French Guiana, on its way to demonstrate technology for observing gravitational waves from space.
Gravitational waves are ripples in the fabric of spacetime, predicted a century ago by Albert Einstein’s General Theory of Relativity, published on 2 December 1915.
Einstein’s theory predicts that these fluctuations should be universal, generated by accelerating massive objects. However, they have not been directly detected to date because they are so tiny. For example, the ripples emitted by a pair of orbiting black holes would stretch a million kilometre-long ruler by less than the size of an atom.
LISA Pathfinder will test the extraordinary technology needed to observe gravitational waves from space. At its core is a pair of identical 46 mm gold–platinum cubes separated by 38 cm, which will be isolated from all external and internal forces acting on them except one: gravity.
The mission will put these cubes in the purest free-fall ever produced in space and monitor their relative positions to astonishing precision, laying the foundations for gravitational wave observatories in space.
Such future missions will be key partners to the ground sites already searching for these elusive cosmic messengers. Space and ground experiments are sensitive to different sources of gravitational waves, both opening up new possibilities to study some of the most powerful phenomena in the Universe.

The Vega launcher lifted off at 04:04 GMT (05:04 CET). About seven minutes later, after separation of the first three stages, the first ignition of Vega’s upper stage propelled LISA Pathfinder into a low orbit, followed by another ignition about one hour and forty minutes into the flight.
The spacecraft separated from the upper stage at 05:49 GMT (06:49 CET). Controllers at ESA’s operations centre in Darmstadt, Germany then established control.
Over the next two weeks, the spacecraft itself will raise the orbit’s highest point in six critical burns.
The final burn will propel the spacecraft towards its operational location, orbiting around a stable virtual point in space called L1, some 1.5 million kilometres from Earth towards the Sun.

LISA Pathfinder exploded view
LISA Pathfinder is expected to reach its operational orbit about 10 weeks after launch, in mid-February. After final checks, it will begin its six-month scientific mission at the beginning of March.
En route to the final orbit, the two cubes will be released from the locking mechanisms that hold them during launch and cruise. Once in orbit around L1, the final mechanisms will be unlocked and the cubes will no longer be in mechanical contact with the spacecraft.
A complex system of laser beams bouncing between the two cubes will measure how close to true free-fall they are to within a billionth of a millimetre – never previously achieved in space.
“Fundamental research tries to understand our world,” says Johann-Dietrich Woerner, ESA’s Director General.
“Einstein’ s theoretical findings are still very impressive. With LISA Pathfinder we will try to take a further step towards confirmation of one of Einstein’s predictions: gravitational waves.”
The spacecraft itself will be an active part of the experiment, firing tiny thrusters about 10 times a second to adjust its position and avoid making contact with the cubes, thus shielding them from any forces that would prevent them from moving under the effect of gravity alone.
If these extraordinarily high-precision measurements and operations can be achieved by LISA Pathfinder, the door will be open to building a future space observatory, capable of detecting the minute disturbances in spacetime produced by gravitational waves, which are expected to be a few tens of a billionth of a millimetre over distances of millions of kilometres.
“Gravitational waves are the next frontier for astronomers. We have been looking at the Universe in visible light for millennia and across the whole electromagnetic spectrum in just the past century,” says Alvaro Giménez Cañete, ESA’s Director of Science and Robotic Exploration.
“But by testing the predictions made by Einstein one hundred years ago with LISA Pathfinder, we are paving the road towards a fundamentally new window on the Universe.”
LISA Pathfinder will operate as a physics laboratory in space. Over an intense period of six months, mission scientists will analyse the data received on Earth from each day’s operations to plan the experiments to be performed on the satellite during the following days.

LISA Pathfinder launch composite at IABG’s space test centre
“After many years of development and testing on the ground, we are looking forward to the ultimate test, which can only be run in space,” says Paul McNamara, ESA’s LISA Pathfinder project scientist.
“In a few weeks, we will be exploring the very nature of gravity in space, gaining the confidence to build a full-scale space observatory to study the gravitational Universe in the future.”
An industrial team led by the prime contractor, Airbus Defence & Space Ltd, built the spacecraft. Airbus Defence & Space GmbH provided the integrated LISA Technology Package payload and a consortium of European companies and research institutes provided its subsystemsNASA provided additional hardware and software that contributes to the mission by validating an alternative technological approach to keeping the spacecraft from making contact with the test masses.
“Integrating LISA Pathfinder posed many challenges, and we are extremely happy to see our trailblazing machine finally in space, ready to embark on its journey to L1, where it will pave the way for a new class of future space projects,” concludes César García Marirrodriga, ESA’s LISA Pathfinder project manager.
About the launcher
The launch of LISA Pathfinder was the last of five flights intended to demonstrate the capability and flexibility of the Vega launcher system, as part of ESA’s Verta – Vega Research and Technology Accompaniment – programme.
During the Verta period, Vega has confirmed its versatility by delivering payloads into different orbits, demonstrating the full range of possible missions.
ESA was responsible for all Verta missions, which have refined and improved the launch system configuration and operations.
The Vega launches in 2015 (IXV, Sentinel-2A and LISA Pathfinder) have displayed the capacity of the system to reach three missions per year, providing confidence to customers and helping Arianespace to maintain its lead in this market segment.
The Vega launcher program is now fully qualified and ready for commercial exploitation by Arianespace.

How to use space to conserve history