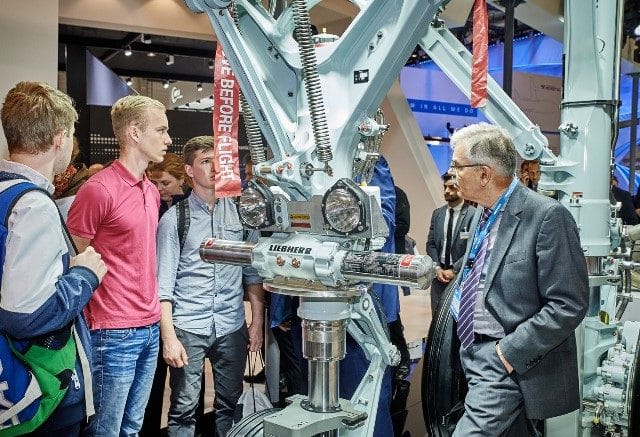 May 2018 – Liebherr-Aerospace, one of the regular names among the exhibitors at ILA Berlin Air Show that took place from April 25 to 29, 2018 at the Berlin ExpoCenter Airport, looks back at a successful participation in the event.

“ILA 2018 has been for us a very fruitful show to strengthen the ties between French and German aerospace industry”, says François Lehmann, Managing Director of Liebherr-Aerospace Toulouse SAS and Member of the Board at French Aerospace Industries Association (GIFAS), “many joint events showed the strong relationship between France and Germany. From the Liebherr-Aerospace perspective, the level and number of delegations was impressive. It shows the willingness and need of working together. We will benefit from it to further develop the partnership with our customers.”

Arndt Schoenemann, Managing Director of Liebherr-Aerospace Lindenberg GmbH and Vice President Equipment and Materials at the German Aerospace Industries Association (BDLI), is also very satisfied with ILA 2018: “This air show stands for Innovation and Leadership in Aerospace and I am convinced that it was the best ILA ever. German Chancellor Merkel opened the event in an impressive ceremony and welcomed more than 1000 exhibitors from 40 countries. She and many following top level delegations visited our stand and showed great interest in Liebherr’s activities and capabilities in aerospace. In addition, we met most of our important customers.”

The booth of the Federal Ministry for Economic Affairs and Energy (BMWi) and the BDLI (German Aerospace Industries Association) under the heading of “ILA Future Lab” attracted many visitors in Hall 2. Liebherr-Aerospace presented here its innovative, weight-optimized spoiler-actuator valve block which is the first 3D-printed primary flight control hydraulic component flown on an Airbus A380 test aircraft.  Representatives of Liebherr-Aerospace also participated in panel discussions about for example the Boeing 777X program and the company’s cooperation with the US-American aircraft manufacturer.

Prominent presence at BDLI Career Workshop in the ILA CareerCenter

Visitors just could not ignore Liebherr-Aerospace’s highlight in the Career Workshop organized by the BDLI in Hall 1: an Airbus A350 nose landing gear, over 4 m high showed the way to the Liebherr booth, where visitors had the chance during the ILA public days to inform themselves about the career and training opportunities and ask the team of the human resources department many questions.

Liebherr-Aerospace is a leading supplier of systems for the aviation industry and has more than five decades of experience in this field. The range of aviation equipment produced by Liebherr for the civil and military sectors includes flight control and actuation systems, landing gear and air management systems, as well as gears and gearboxes and electronics. These systems are deployed in wide-bodied aircraft, single aisle and regional aircraft, business jets, combat aircraft, military transporters, military training aircraft, civil helicopters and combat helicopters.

Be the first to comment on "Liebherr-Aerospace: Successful ILA Berlin 2018"