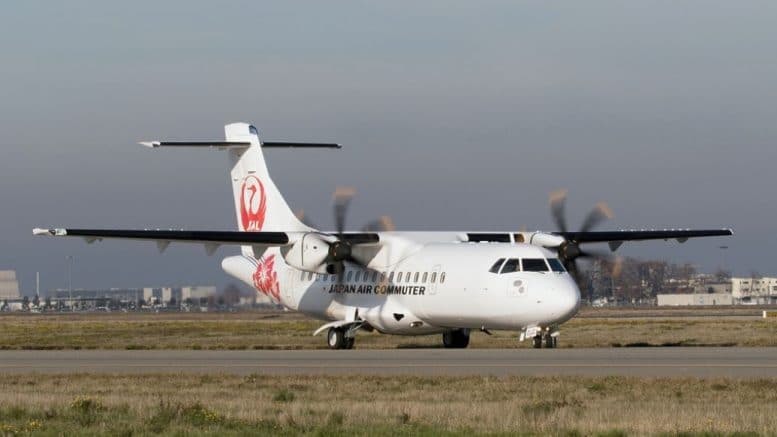 Toulouse, January 20, 2017 – Japan Air Commuter Co. Ltd. (JAC), subsidiary of Japan Airlines, became today a new ATR operator with the introduction of the modern and eco-efficient ATR 42-600 into its fleet. Eight other aircraft will be delivered over the coming three years. JAC is currently undertaking an important fleet modernization process.

Progressively, their nine new ATRs will start operations on both main routes and on connections from and to smaller islands and communities across the country.

Japan is a mature, yet dynamic, market with more than 100 regional aircraft and an average fleet age of over 10 years. Japanese airlines are expected to renew and expand their regional fleets in the years to come in order to face an increasing tourism across the country within the next years. Japan is expected to attract over 40 million tourists by 2020, and will host major events such as the Olympic Games in Tokyo in 2020 or the Rugby World Cup in 2019.

Hiroki Kato, President of Japan Air Commuter Co. Ltd, declared: “The unrivalled airport accessibility of the ATRs, along with their high standards of safety and comfort, make the ATR -600s the perfect solution for our mission: connecting small communities and providing highquality air service across the country.”

Christian Scherer, ATR’s Chief Executive Officer, highlighted “the suitability of the ATR -600s to generate business opportunities and strengthen community links”. He added: “Japanese passengers are arguably among the most conscious and demanding travelers about environment and excellence. The ATR aircraft will contribute to the renewal of regional aircraft fleets in Japan with the highest eco-efficient and quality standards.”

The airline and ATR started their partnership at the last Paris Airshow, in 2015, with the signature of a contract for the introduction of ATR 42-600s in Japan. The deal represented a major milestone for ATR, bringing its firm order book to 1500 aircraft sold since the beginning of the programme.

About Japan Air Commuter (JAC):
Founded in 1983, Japan Air Commuter is a JAL Group Company with Japan Airlines holding 60% as its principal shareholder, and the remaining shares jointly held by the 12 Municipalities of the Amami Islands of Kagoshima, Kyushu. Based in Kagoshima Airport, Japan Air Commuter operates 19 aircraft, 97 daily departures on 23 routes, and serves as the essential public air transport means for 1.6 million passengers annually between the beautiful Amami islands and Western Japan.

About ATR
Founded in 1981, ATR is the world leader on the market for below-90-seat regional aircraft. Since its creation, ATR has sold over 1,500 aircraft. ATR aircraft equip the fleets of some 200 airlines in nearly 100 countries. ATR is an equal partnership between two major European aeronautics players, Airbus and Leonardo. Based in Toulouse, France, ATR is well established worldwide with a large customer support and sales network, including Customer Service Centers, training centers and warehouses.