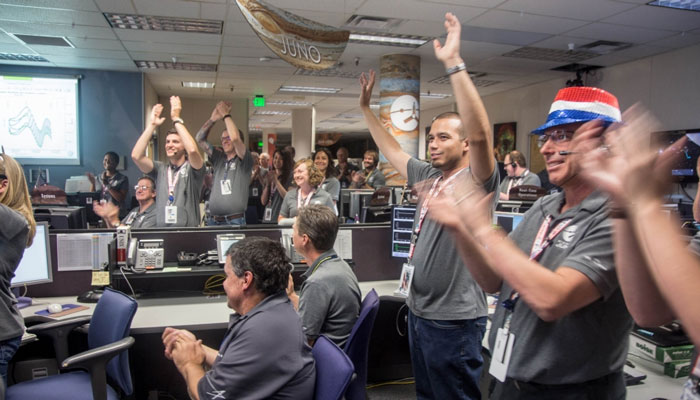 After a five-year, 1.76-billion-mile journey, NASA’s Juno spacecraft, built by Lockheed Martin (NYSE: LMT), was placed into a large, elliptical polar orbit around Jupiter this evening. The spacecraft’s flight operations were controlled by a joint team at Lockheed Martin’s Mission Support Area near Denver, and NASA’s Jet Propulsion Laboratory (JPL) in Pasadena, California.

“Tonight, 540 million miles away, Juno performed a precisely choreographed dance at blazing speeds with the largest, most intense planet in our solar system,” said Guy Beutelschies, director of Interplanetary Missions at Lockheed Martin Space Systems. “Since launch, Juno has operated exceptionally well, and the flawless orbit insertion is a testament to everyone working on Juno and their focus on getting this amazing spacecraft to its destination. NASA now has a science laboratory orbiting Jupiter.”

Final commands to ready Juno for the orbit insertion were sent to the spacecraft four days ago, basically putting it into autopilot. So at 9:18 p.m. MDT today, those commands fired the large main engine for a 35-minute burn that slowed the spacecraft by 1,212 mph. This allowed it to be captured by Jupiter’s massive gravity and placed into a large elliptical polar orbit around the planet that is initially 53 days long. In following months, the orbit will be reduced to 14 days long for science observations.

Jupiter is the solar system’s largest planet, more than two-and-a-half times as massive as all of the other planets combined. Juno will conduct an in-depth study of the giant gas like no other mission before. The mission’s primary goal is to improve our understanding of the formation and evolution of the planet and our solar system. So over the next 20 months, mission scientists will investigate the planet’s origins, interior structure, deep atmosphere and magnetosphere.

So Headquartered in Bethesda, Maryland, Lockheed Martin is a global security and aerospace company that employs approximately 125,000 people worldwide and is principally engaged in the research, design, development, manufacture, integration and sustainment of advanced technology systems, products and services.

For more information about

Be the first to comment on "Hello Jupiter: Lockheed Martin-Built Juno Spacecraft Placed into Orbit"