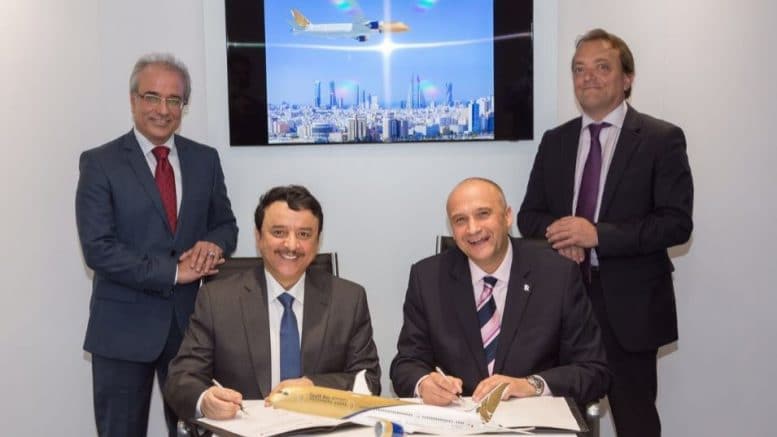 In addition, Gulf Air also has the option to purchase the same engine to power 6 further Boeing 787-9s.

Mr. Maher Salman Al Musallam, Gulf Air Chief Executive Officer, said: “Gulf Air’s current wide body fleet are also powered by Trent 700 engines and, with this latest development, we look forward to continuing our longstanding relationship with Rolls-Royce as we take an important step forward in developing our future fleet. We have experience of the Trent engine and its durability and resilience in a variety of operating conditions and we are confident the Trent 1000 will deliver the same outstanding performance.”

Eric Schulz, Rolls-Royce, President – Civil Aerospace, said: “We are proud to be selected by a valued customer such as Gulf Air and this marks a significant success for the Trent 1000. It has developed a real momentum in the marketplace, winning more than 60 per cent of engine competitions in the last six years.”

Gulf Air’s restructured aircraft orders were announced in January this year at the Bahrain International Airshow 2016 and comprise 45 aircraft in total with deliveries commencing from Q2 2018. Today’s announcement follows the recent release of Gulf Air’s 2015 financial and operational results, which showed the airline’s ongoing positive development as it realises full commercial sustainability and increasingly focuses on managing and further investing in its ongoing growth and development.

Gulf Air, the national carrier of the Kingdom of Bahrain, commenced operations in 1950, becoming one of the first commercial airlines established in the Middle East. Today, Gulf Air is a major international carrier serving 40 cities in 23 countries spanning three continents. The airline operates one of the largest networks in the Middle East, with double daily flights or more to 10 regional cities, in addition to select destinations in the Indian Subcontinent and Europe, from its hub at Bahrain International Airport. Gulf Air serves all its destinations with a combination wide and narrow body fleet totalling 28 modern aircraft. Renowned for its traditional Arabian hospitality, evidenced by the airline’s signature family and business friendly products, Gulf Air is committed to being an industry leader and developing products and services that reflect the evolving needs and aspirations of its passengers.