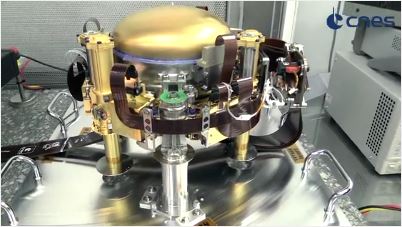 The InSight mission’s science goal is to understand how Mars formed and evolved into the frozen desert planet it is today. The mission is set to launch on 5 May atop an Atlas V vehicle from Vandenberg Air Force Base (VAFB), California, and will arrive at Mars on 26 November after a six-month voyage.
InSight will deploy sophisticated geophysical instruments never used before on Mars to gauge the planet’s seismic activity. Seismic measurements by SEIS combined with readings of the planet’s internal heat flow and subtle variations in its rate of rotation will reveal its deep interior, piercing the
secrets of the size and nature of its core, viscosity of its mantle and thickness of i ts crust to tell scientists more about how Mars formed and evolved. Many scientists believe that in its early lifeMars had an environment similar to Earth’s before becoming the icy desert we know today, most likely as a result of its relatively small size. Mars was probably habitable, but did it ever actuallysupport life? This is the big question driving exploration missions to the red planet.
The SEIS seismometer is the core instrument of the InSight mission, designed to analyse ‘marquakes’, meteorite impacts and tidal effects produced by Phobos to probe Mars’ interior. Thiswill be the first time a seismometer has been deployed on the planet’s surface. CNES has developed
a dedicated ground segment called SISMOC (SeIS on Mars Operations Centre) to analyse telemetry from Mars and send telecommands to SEIS throughout the mission.

Located at CNES’s Toulouse Space Centre, SISMOC will relay seismic data for analysis to IPGP, which will then distribute them to scientists around the world. CNES is lead contractor for SEIS, is funding French contributions to the mission, coordinating the international mission consortium and responsible for integrating, testing and supplying the complete instrument to NASA. IPGP is the instrument principal investigator and designed the very-broad band(VBB) sensors that are the core of the seismometer built by specialist equipment manufacturer Sodern. The high-frequency sensors are being supplied by Imperial College London and Oxford University in the United Kingdom. The levelling system is being supplied by the Max Planck Institute
for Solar System Research (MPS, Göttingen) in Germany. The electronics unit is being supplied byNthe Swiss Federal Institute of Technology (ETH Zurich). The Jet Propulsion Laboratory (JPL) in the United States is supplying the shielded cable that will connect the seismometer on Mars’ surface to
its control electronics on the lander. JPL is also supplying the vacuum sphere housing the VBB sensors and the thermal shielding protecting the seismometer from temperature and wind variations.
1 A member of Sorbonne Paris Cité
2/2CP055-2018 – InSight_va.docx
France’s ISAE aeronautics and space institute digitally modelled the sources of noise in the instrument and helped to build SEIS’s flight software.
Besides IPGP, other research laboratories belonging to CNRS and French universities have worked on developing SEIS—the IRAP2 astrophysics and planetology research institute, the IMPMC3 mineralogy, materials physics and cosmochemistry institute, the Navier4 joint research unit and the
LMD5 dynamic meteorology research laboratory—and will be involved in data analysis (LPGN planetology and geodynamics laboratory in Nantes6, J.L. Lagrange laboratory7) and distribution foreducational purposes, for example through the Sismo at School network (GeoAzur8).
At the presentation, Jean-Yves Le Gall commented: “Mars is a major focus of interest for the international scientific community. Putting a seismometer for the first time on the surface of the red planet will give us an unprecedented opportunity to learn more about its deep interior structure. This
mission also symbolizes the close relationship that France and the United States have built up together. I invite the world’s scientists to ready for the lift-off on 5 May and the landing on 26 November in the western part of Elysium Planitia.”
Antoine Petit added: “Nearly 50 years after the Apollo 11 mission first placed a seismometer on the Moon, we are just months away from seeing the first-ever seismic measurements from Mars. The unique data the InSight mission is set to acquire thanks to an international collaborative effort
involving French research scientists will significantly advance our understanding of how Mars works.”