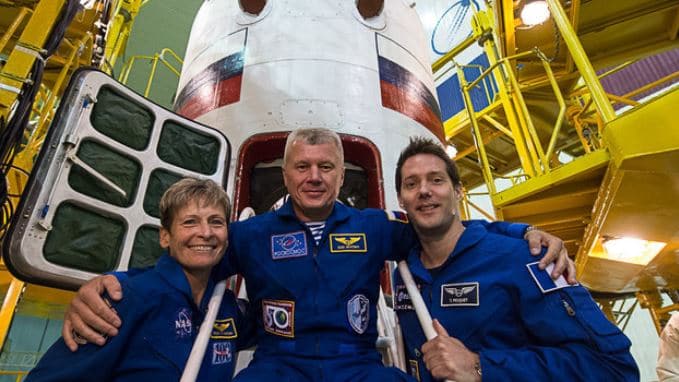 Peggy, Oleg and Thomas in front of Soyuz

The trio will be flying to the International Space Station on a new model of Soyuz ferry designated MS. The MS stands for ‘modernised systems’ and this will be the third launch of the lighter, upgraded Soyuz. A new spacecraft means new flight procedures, so Oleg, Thomas and Peggy have more homework than usual to master the controls.

They passed their first test on 6 October with a manual reentry exam, piloting the craft back to Earth safely in a simulation.

Thomas is the flight engineer, sitting on the left of commander Oleg and acting as co-pilot for launch and return.

On 13 October the trio will enact a rendezvous and docking with the Space Station in their simulator at Star City near Moscow.

These exams are as faithful to the real thing as possible – everything except the weightlessness, the Station and movement is recreated. The instructors invariably programme emergency scenarios into the mix to make sure the astronauts react accordingly and show they know their stuff.

After their second test, the trio have 10 days to prepare for the last stretch: in three days they must pass another rendezvous simulation and an exam on the Station’s Russian segment, ending with the final Soyuz qualification exam on 25 October.

That last exam will see them work through a complete launch and docking dressed in the Sokol suits they will wear in space. To begin, commander Oleg will choose an unmarked envelope that contains the emergency scenarios that will be played out – from a fire in the spacecraft to loss of pressure or problems with the docking mechanism.

Journey to the ISS Part 2: Soyuz rendezvous and docking explained

Afterwards, Oleg, Peggy and Thomas will pay a traditional tribute to fallen cosmonauts at Moscow’s Red Square before heading to the launch site at Baikonur in Kazakhstan.

Thomas says, “These are exciting times and I am privileged to be working with the best instructors and crewmates who inspire confidence at every step of the journey. I cannot wait to be launched be into space with Oleg and Peggy.”

Thomas is keen on sharing his experience in the run up to launch and his adventure in space – follow him and the mission via thomaspesquet.esa.int and watch the launch live on the ESA website.