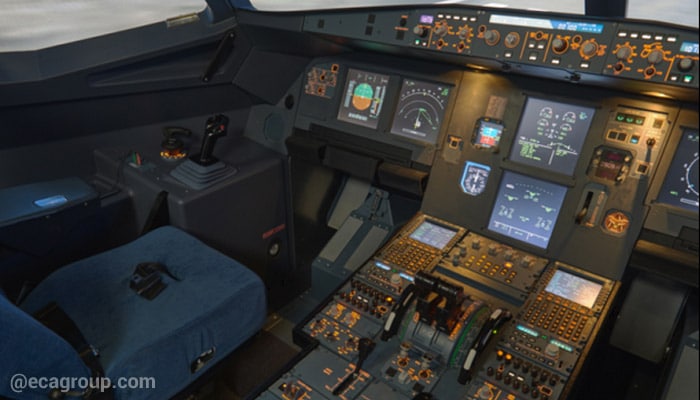 This qualification, obtained after hours of extensive testing by aviation experts, certifies the quality of ECA Group Flight Training Device and its compliance with the highest requirement levels. Its makes the difference between a generic familiarization tool and a professional training system, allowing ENAC to teach the 20 mandatory hours for MCC pilot training on ECA Group simulator.

ENAC, located in Toulouse, France, is the leading aeronautics and aviation university in Europe, providing a broad range of training, studies and research activities. ENAC is known internationally for its training of ATPL and MPL pilots and welcomes more than 3000 students per year.

ECA Group A320 FTD has been qualified FNPT II MCC but it actually exceeds the requirements of the norm, as it has been designed to comply with EASA FSTD(A) FTD Level 2 standard. Lower quality solutions include either a generic aircraft simulation or drastic simplifications of cockpit panels. ECA Group’s solution includes a unique combination of FFS Level hardware replicas and high fidelity simulation of Airbus A320 aircraft, allowing ENAC to use the simulator not only for MCC courses, but also to teach specific A320 procedures. Be the first to comment on "ENAC A320 FNPT II MCC : ECA Group Simulator qualified by DGAC and fully operational to train"