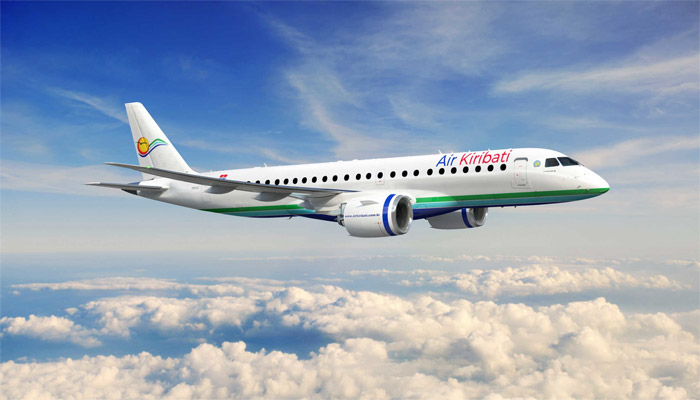 Singapore, December 19, 2018 – Embraer has announced the signing of a contract with the Government of Kiribati, in partnership with their national airline, Air Kiribati, for two firm orders for the E190-E2 E-Jets and two purchase rights for the same model. With all purchase rights being exercised, the contract has a value of USD 243 million, based on current list prices. The order will be included in Embraer’s 2018 fourth-quarter backlog.

Scheduled for a 2019 delivery, the E190-E2 will enable the flag carrier for the Republic of Kiribati, located in the central Pacific, to fly longer domestic and international routes than it currently does with its turboprop fleet. Air Kiribati will be the launch operator for the E190-E2 in the Asia Pacific region (excluding China). This order comes after a three-week Asia Pacific tour of the ‘Shark’ livery E190-E2 in October, which included a stop in Tarawa, the capital of Kiribati. Spanning four time zones and comprised of more than 30 islands, Kiribati is the only country in the world to be in all four hemispheres.

“We warmly welcome Air Kiribati to the Embraer family and we will work closely with the airline as they transition to the E190-E2 through our extensive entry-into-service package and world-class support team in the region,” said Cesar Pereira, Asia Pacific Vice President, Embraer Commercial Aviation. “Flying in the Pacific, over large bodies of water, requires outstanding range, performance and ample cargo capacity. Air Kiribati’s selection of the E190-E2 is yet another validation of the world’s most efficient single-aisle jet design, which exceeds these requirements and will enable the airline to enhance its flight frequency and to boost its network.”

“We were impressed with what we saw when the E190-E2 visited Kiribati in October,” said Hon. Willie Tokataake, Minister for Information, Communication, Transport and Tourism Development of the Kiribati Government. “Given its impressive range, lower fuel consumption and maintenance costs and dual class configuration that brings comfort to our passengers compared to its peers, the E190-E2’s capabilities empower us to enhance connectivity within our country and beyond, taking our nation to its next phase of growth.”

With a maximum range of up to 2,850 nautical miles, the E190-E2 can operate over the vast expanse of Kiribati, including from Tarawa directly to Kiritimati (Christmas) Island, one of the most challenging routes in the Pacific. The current domestic connection from Tarawa to Kiritimati includes an international stopover in Fiji.

Embraer is the world’s leading manufacturer of commercial jets with up to 150 seats. The Company has 100 customers from all over the world operating the ERJ and E-Jet families of aircraft. For the E-Jets program alone, Embraer has logged almost 1,800 orders and 1,500 deliveries, redefining the traditional concept of regional aircraft.

About Embraer
Embraer is a global company headquartered in Brazil with businesses in commercial and executive aviation, defense & security. The company designs, develops, manufactures and markets aircraft and systems, providing customer support and services.

Embraer is the leading manufacturer of commercial jets with up to 150 seats. The company maintains industrial units, offices, service and parts distribution centers, among other activities, across the Americas, Africa, Asia and Europe.

Embraer and United Airlines Sign Contract for up to 39 E175s