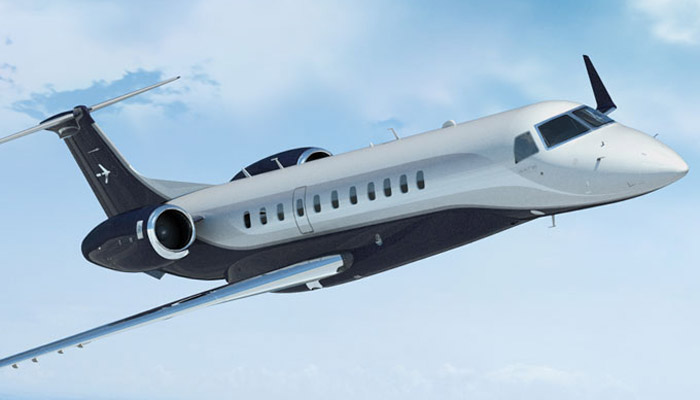 Embraer Executive Jets today announced the order for a new Legacy 650 large jet to an undisclosed customer, based in the Middle East.

This order adds to the 29 Legacy 650s and Legacy 600s that are currently operating in the Middle East. The aircraft is scheduled to be received at the end of 2015 and will be managed by Titan Aviation Group, a global aviation specialty service provider headquartered in the United Arab Emirates.

“The Legacy 650 has impressed customers because of its range, reliability and ample cabin and baggage space offering ? the largest in this category. This aircraft can fly non-stop from the main cities in the Middle East to London. We have about 45 business jets in the Middle East and about 60% of this fleet are Legacy 650s or Legacy 600s, which is a testament to the aircraft’s popularity.” said Marco Tulio Pellegrini, President and CEO, Embraer Executive Jets. “This is the customer’s second purchase from Embraer. We are grateful for the confidence placed in us and thank Titan Aviation for their steadfast support. We are fully committed to supporting their operations.”

The 45 aircraft represents about 20% of the fleet of privately-owned business jets in the region aged under 10 years. Embraer Executive Jets also has a robust and comprehensive customer support and services network globally, with two authorized service centers in the Middle East.

“The owner currently owns a Legacy 600 and decided to upgrade to a Legacy 650 as he has been very pleased with Embraer’s supportive partnership,” said Captain Sakeer Sheik, Managing Director of Titan Aviation Group. “The Legacy 650 was chosen because of its range, reliability, low cost of operation, comfort and its ability to land in airports such as London city. With this new Legacy 650 order, Titan Aviation will be managing three Embraer’s executive jets in the Middle East and in India on behalf of the respective owners.”

The Legacy 650, an enhanced version of the Legacy 600 with longer range, lower cabin noise and latest interior and avionics features, entered into service in late 2010. There are currently more than 270 Legacy 650 and Legacy 600 present globally.

The large Legacy 650 comfortably carries up to 14 passengers with privacy in three distinct cabin zones, and premium acoustic comfort. In addition to the best-in-class galley and a fully accessible in-flight baggage compartment that surpasses in size even those of most ultra-long range business jets, the aircraft may be configured with up to two lavatories. The Legacy 650 features internet connectivity and the latest generation in full HD in-flight entertainment, with Honeywell’s Ovation Select entertainment and cabin management system.

The Legacy 650 features advanced navigation capabilities and the Honeywell Primus Elite? avionics suite. The Legacy 650 has a range of 3,900 nautical miles (7,223 kilometers) with four passengers, with NBAA IFR fuel reserves, which means that the aircraft can fly nonstop from Dubai to Singapore.

Embraer is one of the world’s leading executive jet manufacturers, having entered the business aviation market in 2000 with the Legacy jet, which led to the launch of Embraer Executive Jets in 2005. Its portfolio, the broadest in the market, consists of the entry-level Phenom 100E and the Phenom 300 light jet, the Legacy 500 midsize and Legacy 450 mid-light, the super midsize Legacy 600 and large Legacy 650, and the ultra-large Lineage 1000E. Completing ten years in the market, Embraer Executive Jets’ global fleet exceeds 930 aircraft, which are in operation in more than 60 countries and are supported by the Company’s global Customer Support and Services network of 75 owned and authorized service centers, complemented by a 24/7 Contact Center, at its headquarters, in Brazil.

To view the original version on PR Newswire, visit:https://www.prnewswire.com/news-releases/embraer-executive-jets-receives-legacy-650-order-in-the-middle-east-300191578.html

Embraer Introduces the Most Disruptive and Technologically Advanced Aircraft

Embraer Signs Order with Widerøe for up to 15 E2 Aircraft