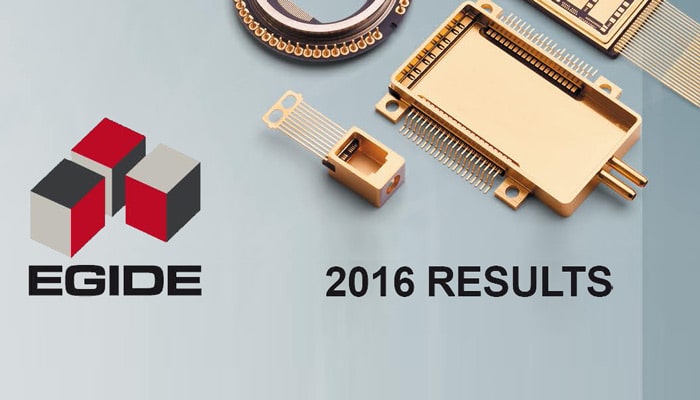 Trappes, March 31, 2017 – 7:00 am (CET) – Results here presented are based on consolidated financial statements for 2016 as of yet unaudited though reviewed by the Audit Committee on March 29, 2017. While the annual closure-of—accounts is still in progress, no changes to the ﬁgures presented above are expected.

Commenting these 2016 financial highlights, James (Jim) F. Collins, Chairman of the Egide Group, stated: “Revenue growth in 2016 combined with the work of our teams contributed to improved performances. On that basis, operating results increased by 60% and gross operating proﬁt was positive. We will continue our efforts in 2017.”

2016 CONSOLIDATED FINANCIAL HIGHLIGHTS
Revenue: Egide Group had consolidated revenue (unaudited) in 2016 of €22,2 million, up from €20,6 million in 2015. The change in the Euro/US Dollar exchange rate had no impact in 2016. The breakdown of revenue by business application is as follows:

For 2016, a net loss was recorded of €0.73 million, representing a significant improvement from the prior year with a loss of €1.38 million.

Outlook: The capital increase carried out at the beginning ofthe year was a big success generating proceeds of €82 million. These funds made it possible to finance the full acquisition of the operating assets and liabilities of the US company Santier LLC, based in San Diego, California. This company is specialized in the manufacture of thermal management materials for eliminating heat produced by electronic components and addressing primarily the US defense market.

Operating and commercial synergies between Santier and the rest of the group will be gradually implemented while Egide‘s sales department will be organized into two regional divisions: North America and Europe/Rest of the World in order to address the specific characteristics of each of these regions.

Jim Collins concluded: “Based on a book-to-bill ratio above 1 at the end of 2016 and the increase in our backlog of orders, we anticipate further improvements in 2017. Our recent ceramic production line in Cambridge (Maryland, USA) has met with success and we foresee contracts a amounting to US$500, 000 this year.
In addition, the qualiﬁcation of our 40 and 100 Gb/s TOSA/ROSA packages for optoelectronic applications will also support growth in sales. These developments, combined with the acquisition of Santier, Will contribute to continuing improvements in Group results. “

Be the first to comment on "EGIDE GROUP – 2016 Results: operating results increased by 60% and gross operating profit positive"