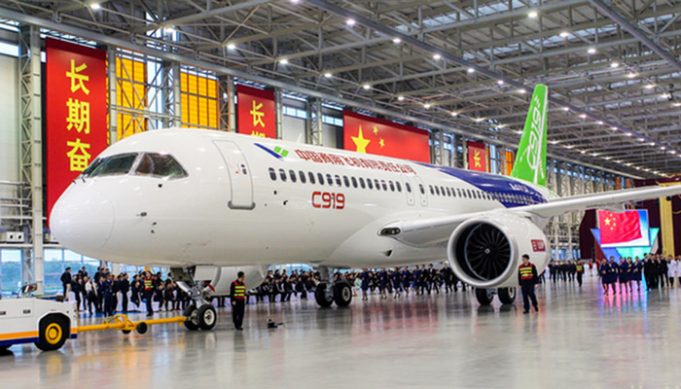 In the space of barely a month, China has succeeded in passing three major stages of aeronautical development.

Of these, the roll-out of the medium-haul C919 on 2 November was quick to hit the headlines, as was delivery of the first Chinese regional jet, the ARJ21, to Chengdu Airlines on 1st December. A third plane, the RX1E two-seater, which obtained its production approval from the Chinese authorities on 3 December, has not yet received such media coverage. So why focus on a two-seater, you may ask? Quite simply because this electric aircraft is treading on the toes of many existing projects worldwide. As well as Airbus Group’s E-Fan which, one might recall, crossed the English Channel on the traces of Blériot in summer 2015, there is also the German Electra One, which made its first flight in 2011, and the Taurus Electro, launched in 2007 and already commercialised at a rate of 20 or so models per year. In all, the list of light electric aircraft is a dozen names long.
The arrival on the market of these three planes provides confirmation, if such were needed, of the Chinese government’s determination to raise its aircraft industry to a world level and to play a role which seems to worry Western industrialists, including the Americans.

Admittedly, the launch of series production of the small electric plane RX1E is unlikely in itself to give Americans sleepless nights, but with 28 orders already said to have been received, it might well be the last straw. At any rate, Washington has decided to put its foot down and take the lead in accusing China of not respecting financial agreements governing exports and imports of manufactured goods.

On 8 December, the Office of the United States Trade Representative (USTR) filed an official complaint against China to the World Trade Organization (WTO), accusing it of applying VAT to imported goods but not to products made in China. Clearly this includes aircraft, which leap 17% in price (the official VAT rate for the aeronautics sector) as soon as they enter Chinese territory, making home-produced aircraft all the more attractive.

In fact it is probably neither the RX1E nor even the regional plane ARJ21 that worry the Americans most, but the first flight (after many months of delay) of the C919. The reason for this is that this plane attacks the niche of single-aisles targeted by the US with its Boeing 737 family and also by Europe with its Airbus A320 (4 of which per month are in fact assembled in China). The Comac C919, capable of transporting 268 passengers, has yet to carry out its first flight but already boasts an order book of 517 aircraft.

Over the next 20 years, Boeing calculates that China will need 4,630 single-aisle planes of this type and was hoping to corner the market with Airbus (with whom they are neck and neck each year). Indeed Airbus and Europe have already had a complaint lodged against them by the US with the WTO for an alleged system of illegal subsidies, in fact repayable grants.

Admittedly if economic measurements and rules are not observed in the same manner worldwide then competition can be distorted and complaints against such practices are justified. On the other hand, it is a safe bet that even if these cases were to be brought by the WTO, they would have little influence on a country’s capacity to develop an industry when it has decided to do so. We will see if such actions are also taken in the near future with regard to Russia: its SSJ-100 is meeting with real success and the Irkut MC-21 may have suffered delays but will undoubtedly be arriving on the market one day soon.

Be the first to comment on "Does China development inspire fear in the US ?"