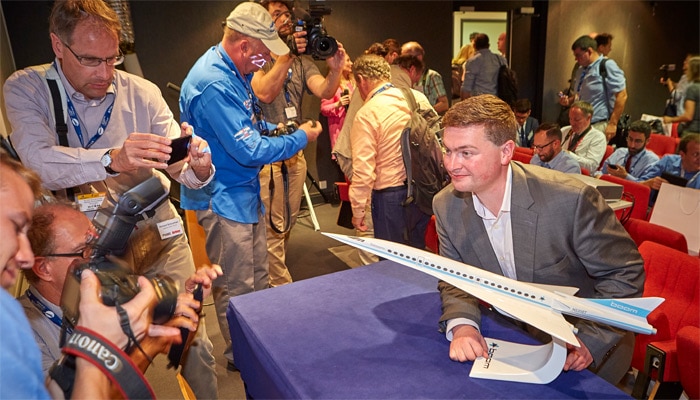 Paris, France — June 20, 2017 — ​Boom Supersonic today unveiled the completed design of the XB-1 Supersonic Demonstrator, the subscale prototype of the Boom supersonic passenger airliner. When it flies next year, the XB-1 will be the world’s fastest civil aircraft, and it will demonstrate in flight the key technologies for mainstream supersonic travel.

The XB-1 design has been refined and optimized since it was unveiled last fall. The completed design has passed a major external design review, verifying that it meets performance and safety standards ahead of component manufacturing and assembly. Among the major changes, the XB-1 now has a third inlet located in the tail. This new inlet design provides greater propulsion system stability, improving aircraft performance and safety. In addition, the XB-1 wing design has evolved with the vertical tail modified to improve performance in crosswind conditions.

Along with the refined design, Boom also provided an update on their order book, now totaling 76 aircraft amongst five world airlines. New airline partners will be announced at special events. The new aircraft reservations are backed by tens of millions in non-refundable payments. “Airlines are excited for something new and different to offer their passengers—and we’re thrilled that major world airlines share our vision for a future of faster, more accessible supersonic travel. We look forward to sharing more about these partnerships in the future,” said Blake Scholl, Founder and CEO. First flight of the XB-1 Demonstrator will be in 2018. Subsonic flight testing will be conducted near Denver; supersonic test flights will take place near Edwards Air Force Base in Southern California.