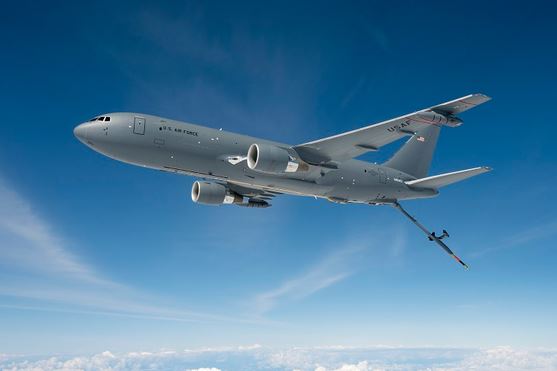 To receive its STC, Boeing’s team completed a series of lab, ground and flight tests, which commenced in 2015. As part of the required flight testing, the team validated the KC-46’s boom and drogue aerial refueling systems met FAA certification criteria.

“Our Boeing/Air Force test team did an outstanding job successfully leading us through all the requirements, and we appreciate the FAA’s collaboration as well,” said Mike Gibbons, Boeing KC-46A tanker vice president and program manager. “This milestone is important in that it is one of the last major hurdles in advance of first delivery to the U.S. Air Force.”

The STC is one of two required FAA airworthiness certifications. Boeing received an Amended Type Certificate for its core 767-2C aircraft configuration in December 2017. While those certifications cover most of the jet, not all military functions and equipment can be certified by the FAA. The U.S. Air Force also must grant a Military Type Certificate (MTC), which is expected in the coming months. Boeing’s team concluded MTC flight testing, which included the jet’s aerial refueling, defensive and other military-specific systems, in early July.

Six aircraft have supported various segments of STC and MTC testing. Overall they have completed 3,500 flight hours and offloaded more than three million pounds of fuel during refueling flights with F-16, F/A-18, AV-8B, C-17, A-10, KC-10, KC-135 and KC-46 aircraft.

The KC-46, derived from Boeing’s commercial 767 airframe, is built in the company’s Everett, Wash., facility. Boeing is currently on contract for the first 34 of an expected 179 tankers for the U.S. Air Force.

When in service, the multi-role KC-46 will refuel U.S., allied and coalition military aircraft using its boom and hose and drogue systems, but also must be able to take on fuel to extend its operational range. The boom allows the tanker to transfer up to 1,200 gallons of fuel per minute, while the hose and drogue systems, located on both the plane’s wing and centerline, enables the KC-46 to refuel smaller aircraft with up to 400 gallons of fuel per minute.