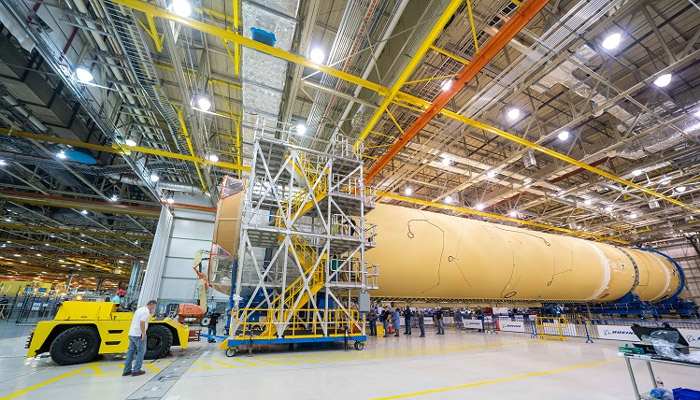 ARLINGTON, Va., Oct. 14, 2019 – NASA and Boeing [NYSE: BA] have initiated a contract for the production of 10 Space Launch System core stages and up to eight Exploration Upper Stages to support the third through the twelfth Artemis missions.

Up to 10 additional core stages may be ordered under the contract, leveraging active labor, materials, and facility resources and supply chain efficiencies for production savings.

SLS is NASA’s deep space exploration rocket that will launch astronauts in the 27-metric ton Orion crew vehicle, plus cargo, from Earth to the moon and eventually to Mars. Boeing is the prime contractor for the rocket’s core stage, avionics, and variations of the upper stage. The rocket is designed to be evolvable for missions beyond the moon.

“We greatly appreciate the confidence NASA has placed in Boeing to deliver this deep space rocket and their endorsement of our team’s approach to meeting this unprecedented technological and manufacturing challenge in support of NASA’s Artemis program,” said Jim Chilton, senior vice president of Boeing’s Space and Launch division.

“Together with a nationwide network of engaged and innovative suppliers we will deliver the first core stage to NASA this year for Artemis I,” Chilton added. “This team is already implementing lessons learned and innovative practices from the first build to produce a second core stage more efficiently than the first. We are committed to continuous improvement as they execute on this new contract.”

Boeing designed, developed, tested and built the first SLS core stage under the original NASA Stages contract, including refurbishing the company’s manufacturing area at the Michoud Assembly Facility (MAF) in New Orleans, building test versions of the SLS structures, and designing more efficient, modern tooling, all while abiding by stringent safety and quality standards for human spaceflight. The second core stage is simultaneously in production at MAF.

Boeing last year delivered the first upper stage, the Interim Cryogenic Propulsion System, built by United Launch Alliance in Decatur, Ala., for the Block 1 version of the evolvable vehicle. The more powerful Exploration Upper Stage design for the Block 1B version is in development, while the MAF facility is being prepared for that build.

SLS is the only rocket that can carry the Orion, and necessary cargo, beyond Earth orbit in a single mission, making it a critical capability for NASA’s deep-space Artemis program.

“Boeing has implemented advanced manufacturing technologies for design, test, and production of the core stages, which will make both core stage production and upper stage development faster, more efficient, and safer,” said John Shannon, Boeing vice president and Space Launch System program manager. “The evolvable nature of the rocket will allow us to onboard new advances in materials and production technologies as we move forward to the moon and on to Mars.”