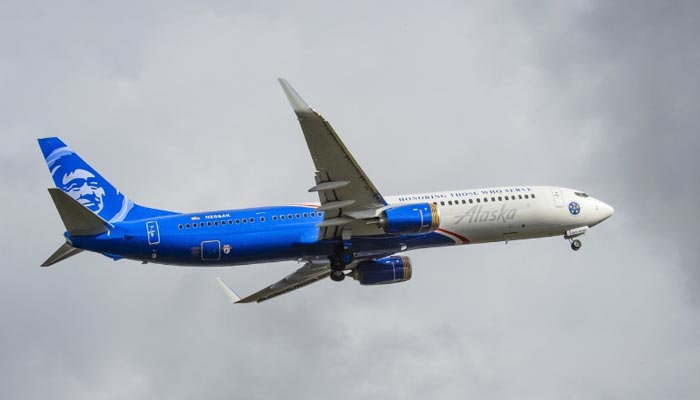 In anticipation of Veterans Day, Alaska Airlines today unveiled the newest aircraft in its fleet featuring a patriotic special paint theme titled “Honoring Those Who Serve.” The 737-900ER is dedicated to the brave men and women of the U.S. military, as well as veterans of the armed forces and their families. Its unique exterior paint scheme, conceived by a small group of Alaska maintenance technicians, was designed to symbolize remembrance, pride, and appreciation. “All of us at Alaska greatly value the bravery and sacrifices of our servicemen and women and their families. We are extraordinarily proud to have this symbol of appreciation that our customers will see and fly on every day,” said Alaska Airlines CEO Brad Tilden. “A lot of individuals worked hard to make this airplane a reality. I want to give a special thank you to the members of our Fallen Soldier program for their continued passion and dedication. Because of them, we have this opportunity to honor those who serve.”

More than 250 airline employees were joined by veterans and current members of the military for a special dedication of the airplane in Alaska’s Seattle maintenance hangar today. In the days leading up to Veterans Day, the plane will fly to cities near military bases, including Anchorage and Fairbanks, Alaska; San Diego, and Washington D.C.

“Alaska Airlines employs more than 1,400 veterans who remind us every day about the dedication and sacrifices our men and women in the military make for our great nation. This plane is a tribute for these employees and veterans throughout our country, thanking them for their service,” said Joe Sprague, the airline’s senior vice president of communications and external relations.

As part of its ongoing support of the military, Alaska partners with many nonprofit organizations including Hiring Our Heroes and Camo2Commerce, both of which help transition veterans into civilian jobs. The company also supports Hero Miles, which provides free travel to injured or ill service members and their loved ones. Since 2014, Alaska customers and employees donated more than 7.4 million miles ? the equivalent of 300 trips around the globe.

Ashley Hence, a veteran and customer-care representative for the company, got a foot in the door at Alaska, thanks to Camo2Commerce.

“I spent three years serving in the U.S. Army and leaving was a big decision,” Hence said. “My husband and I are thankful and blessed to have been given this opportunity and did not worry if my skills would translate to the civilian workforce.”

Other Alaska employees learned how to fly planes in the military. Col. Garin Tentschert, an Alaska captain and Seattle pilot base chief, learned many leadership lessons along the way from his more than 26 years of service in the U.S. Air Force and Reserves.

“When I look at this aircraft, I am thankful for the reminder that there are those still active in the military fighting every day for my freedom,” said Col. Garin Tentschert, Alaska Airlines captain and Seattle base chief pilot. “I’m humbled to be a part of a company that values military service to the point of allowing me to excel in not only my civilian job, but also my military duties, all while understanding that my family is also important.”

About the new plane

What first started as an idea on a napkin with a small group of passionate Alaska maintenance employees three years ago, has now become a tribute in the sky.

The key elements of the design include:

The special livery was created in partnership with Boeing, which shares an appreciation for the value that military personnel bring to the workplace. The companies collaborated throughout the painting and delivery process.

“Boeing employees are proud to deliver an airplane that will serve as a flying tribute to all veterans,” said Brad McMullen, vice president of North America and Leasing Sales, Boeing Commercial Airplanes. “Over 20,000 veterans are employed at Boeing, bringing leadership skills and a strong work ethic cultivated through their military experience. We’re incredibly fortunate to have so many veterans and military family members on our team.”

Multimedia assets from today’s dedication ceremony will be posted to the Alaska Newsroom by 5 p.m. including event photos and b-roll.

Alaska Airlines, together with its regional partners, flies 32 million customers a year to more than 110 cities with an average of 970 daily flights throughout the United States, Canada, Costa Rica, Mexico and soon Cuba. With Alaska’s global airline partners, customers can earn and redeem miles to more than 800 destinations worldwide. Onboard, customers are invited to make the most of their flight with amenities like power outlets at every seat, streaming entertainment direct to their device, Wi-Fi and an inspired food and beverage selection featured on most flights. Alaska Airlines ranked “Highest in Customer Satisfaction Among Traditional Carriers in North America” in the J.D. Power North American Airline Satisfaction Study for nine consecutive years from 2008 to 2016. Alaska Airlines Mileage Plan also ranked “Highest in Customer Satisfaction with Airline Loyalty Rewards Programs” in the J.D. Power Airline Loyalty/Rewards Program Satisfaction Report for the last three consecutive years. Alaska Airlines is a subsidiary of Alaska Air Group (NYSE: ALK).