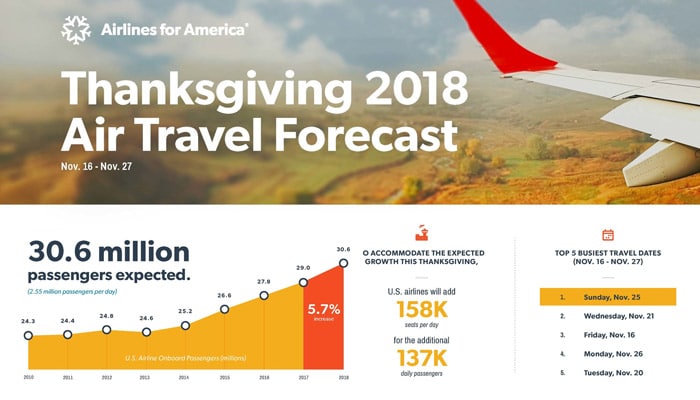 WASHINGTON, Nov. 14, 2018 /PRNewswire/ — Airlines for America (A4A), the industry trade organization for the leading U.S. airlines, today projected that a record 30.6 million passengers will travel on U.S. airlines during the 12-day Thanksgiving air travel period, up from an estimated 29 million passengers during the 2017 travel period. The forecast translates to an estimated 2.55 million passengers per day, up 137,000 per day from a year ago. Airlines are accommodating this increase in demand by adding 158,000 more seats in the marketplace each day, with a total of 2.94 million seats available to flyers every day. 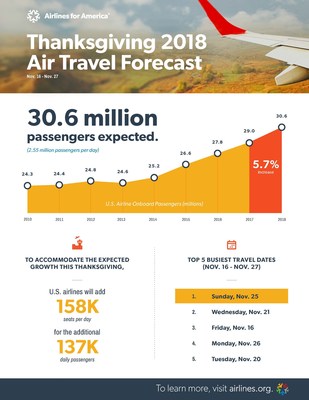 The 2018 Thanksgiving air travel period runs from Friday, Nov. 16, through Tuesday, Nov. 27, with the busiest day projected to be Sunday, Nov. 25, when an estimated 3.06 million passengers will take to the skies.

“The busy holiday travel season kicks off this week, and it is thanks to incredibly accessible and affordable flight options that more travelers than ever before are visiting loved ones, wrapping up year-end business or enjoying a vacation this Thanksgiving,” said A4A Vice President and Chief Economist John Heimlich. “U.S. airlines are investing heavily in their employees, products and facilities to make air travel this holiday season enjoyable for all passengers.”

Daily passenger volumes are projected to range from 1.73 million ? on Thanksgiving Day itself ? to 3.06 million on the Sunday following Thanksgiving. The busiest expected travel days in ranked order are:

The lightest travel day is expected to be Thanksgiving Day, Thursday, Nov. 22.

Airlines rise to meet the growing demand for air travel

As demand for air travel continues to grow, airlines are working hard to improve the customer experience from check-in to touchdown, working with airports and investing heavily in employees, aircraft and facilities. As finances have improved, U.S. passenger airlines have directly invested more than $115 billion in flight and ground equipment, facilities and information technology since 2010. In the first nine months of 2018 alone, airlines invested $13 billion back into the product with new planes, airport amenities and improved technology. According to the annual J.D. Power 2018 North America Airport Satisfaction Study released in September, North American airport satisfaction has climbed to a record high, rising to 761 points in 2018.

Airline and airport collaboration has helped pave the way for widespread infrastructure investment, leading to $130 billion of capital projects that have been completed, are underway or approved at the 30 largest U.S. airports alone since 2008. Development is also robust at smaller airports. Almost every major U.S. airport has seen the supply of airline seats rise over the past five years.

U.S. airlines continue to advocate against raising taxes on passengers, citing the ample resources available for airport improvement funding, including record-high airport revenues and unrestricted cash and investments, as well as all-time high revenues in the Airport and Airway Trust Fund. The U.S. Congressional Budget Office recently projected that the Trust Fund’s unobligated balance would grow to a record $8.7 billion by the end of 2020. U.S. airlines are committed to working alongside airports across the country to improve facilities and the customer experience, without forcing a tax hike on the traveling public.

Even as airline expenses continue to outpace revenues, average ticket prices continue to fall, to $360 in the first six months of 2018 ($338 in fare and $22 in fees). Adjusted for inflation, that’s a decline of more than 5 percent year-over-year and more than 7 percent since 2010. The year-over-year decline in prices reflects a decrease in both airfare and ancillary fees for bags and ticket changes. According to the U.S. Department of Transportation (DOT), second quarter 2018 inflation-adjusted fares were the lowest of any second quarter ever recorded by DOT.

During the first nine months of 2018, nine publicly traded U.S. passenger carriers (Alaska, Allegiant, American, Delta, Hawaiian, JetBlue, Southwest, Spirit and United) reported a combined pre-tax profit of $10.8 billion, or 8.2 percent of operating revenues ? down from $14.9 billion and 12.1 percent, respectively, in the first nine months of 2017. U.S. airlines reported a 7 percent increase in operating revenues and a 12 percent increase in operating expenses, led by a 34 percent jump in fuel costs. Passenger revenue rose 6.5 percent, thanks primarily to 4.8 percent growth in revenue passenger miles flown. These nine carriers recovered 68 cents in revenue for every dollar increase in operating costs during the period.

Customer complaints and involuntary denied boardings on the decline

Through August 2018, airlines reported solid operational performance, including the lowest-ever recorded rate of involuntary denied boardings ? just 0.12 per 10,000 passengers. U.S. airlines completed 98.1 percent of flights through August, exceeding 98 percent for the fourth consecutive year and posted an on-time arrival rate of 78.5 percent, up from 78.2 percent in the first eight months of 2017.

ABOUT A4A
Annually, commercial aviation helps drive $1.5 trillion in U.S. economic activity and support more than 10 million U.S. jobs. U.S. airlines fly 2.3 million passengers and more than 55,000 tons of cargo each day. Airlines for America (A4A) advocates on behalf of the American airline industry as a model of safety, customer service and environmental responsibility and as the indispensable network that drives our nation’s economy and global competitiveness.

For more information about the airline industry, visit airlines.org and the blog, A Better Flight Plan, at airlines.org/blog.