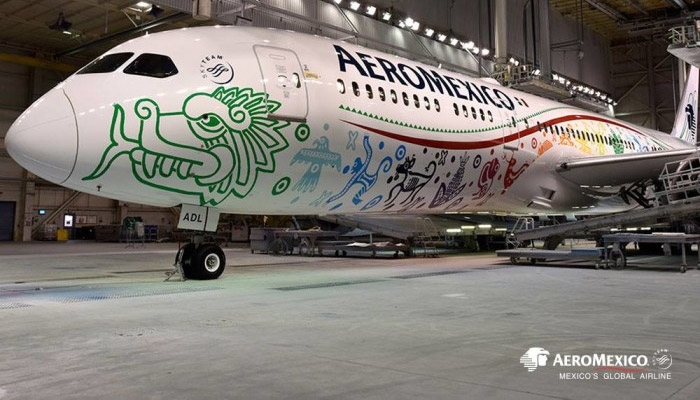 Aeroméxico presents the special livery of its first Dreamliner 787-9. The aircraft will be named Quetzalcoatl (meaning “Feathered Serpent”) after one of the principal deities of pre-Hispanic Mexico. This is the first time in aviation history in which a design of this type is painted on an aircraft’s livery, offering a unique fusion of tradition and modernity. Aeroméxico’s Quetzalcoatl plane left the Boeing Aircraft Paint Hangar after a nine-day process?six days longer than expected?as the engineers found that they needed extra time to add all of the original hues and colours featured in the winning design.

In November 2014, Aeroméxico announced the “Design is in the Air” contest via social media and at several universities, inviting participants to submit a creative image to be painted on an aircraft’s fuselage. More than 1,000 participants presented their designs during the four-week contest period, 400 of which were chosen for meeting the requirements established in the rules. The winning design was created by graphic designer José Manuel Escudero of the Mexican state of Veracruz.

Aeroméxico CEO Andrés Conesa said “At Aeroméxico, we are very excited about the buzz the Quetzalcoatl design has generated. As Mexico’s flagship carrier, this aircraft will become an icon of our fleet and a reflection of what Mexico is today, with culture and tradition represented in what we consider to be one of the most sophisticated creations of modern aviation engineering.”

Conesa added, “We hope this plane will make our country proud. Quetzalcoatl will fly between major airports in Europe and Asia visited by millions of travellers each year.”

Aeroméxico is the second carrier in Latin America to operate the Boeing 787-9 Dreamliner and plans to continue investing until its fleet has ten 787-9 aircraft, with the purpose of providing a better flight experience to customers. If an airline places an order for a 787 today, it could take between 10 to 15 years for it to be delivered. With a fuselage measuring 20 feet wider than the 787-8, the 787-9 will have the capacity for 48 additional passengers on longer routes (up to 300 more nautical miles) with 20% greater fuel efficiency, and up to 20% fewer emissions than the aircraft this model is replacing.

The airline has said that it will wait until the plane lands in Mexico to unveil the interior of this new aircraft that will change its customers’ travel experience.

Grupo Aeroméxico, S.A.B. de C.V. is a holding company whose subsidiaries provide commercial aviation services and promote passenger loyalty programs in Mexico. Aeroméxico, Mexico’s global airline, operates more than 600 daily flights from its main hub in Terminal 2 at the Mexico City International Airport. Its route network spans more than 80 cities on three continents including 45 in Mexico, 17 in the United States, 16 in Latin America, four in Europe, three in Canada, and two in Asia.