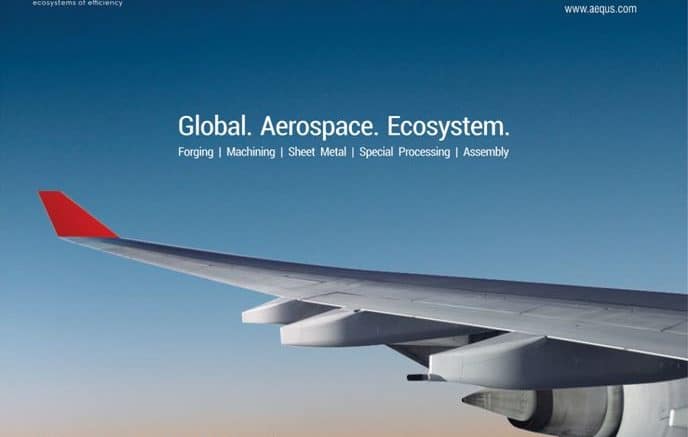 Aequs Aerospace, is one of the fast-growing global aerospace manufacturing ecosystem. It is a preferred supplier of precision machined parts from its sites in India, France and US. Aequs houses inter-related facilities that are strategically located to support the logistical needs of its customers. Aequs holds 4 facilities in France    that were acquired in 2016 from the SiRA Groupe. These facilities specialize in Landing Gear, Engine Components, Actuation system, Aerostructures and many more. Aequs SEZ is the largest aerospace capability in the Indian Private sector. Aequs customers include global industry leaders such as Airbus, Boeing, Safran, UTAS, Eaton, Honeywell SAAB and GKN Aerospace to name a few.

Aequs Aerospace made a turn towards France with the acquisition of SiRA Groupe in February 2016. While SiRA had been a part of the illustrious air show for several years, this was the first time that Aequs Aerospace was introduced as a Global Aerospace Manufacturing company from India.

Aequs Aerospace’s objective at Paris Airshow was to show what the company is offering to the world an ability to deliver value and quality for machined components of landing gears, engine parts for actuators and aerostructures, assemblies etc… Aequs is building a unique ecosystem around the world, where its customers can mitigate their risk of being globalized.

The company has successfully brought in leading players like SAFRAN and UTAS into India through their associations in France and US respectively. This association strongly highlights the advantage of Aequs’ capacity in India along with the capabilities available in different locations of the world.

Aequs recently announced it is doubling the output of the Rafale fighter jet to help reach its goal of tripling annual sales to $300 million by 2020. They will double present turnover of $500,000 on each Rafale due to increased production of the twinjet fighter.

Aequs has an annual contract for supplying components for the Rafale fighters. Rafale uses Dassault’s design and structure, Thales’ electronic systems, Safran’s engine and Sira contributes to each of these suppliers. Aequs acquisition of SiRA will also help it be a local vendor in India for offsets purchase from Dassault Aviation, which has signed a deal to sell 36 Rafale fighters to New Delhi.

Be the first to comment on "Aequs, fast-growing global aerospace manufacturing ecosystem"