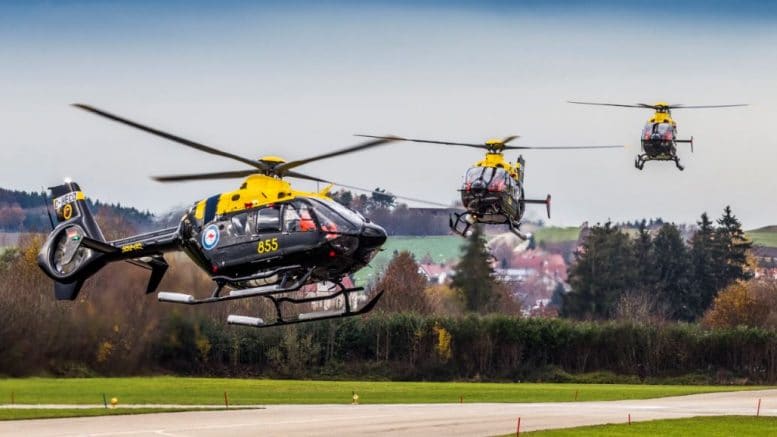 Donauwörth, Germany, 22 November 2016 – Airbus Helicopters has achieved Factory Acceptance of the last six of the EC135T2+ for the Helicopter Aircrew Training System (HATS) for the Australian Defence Force (ADF), completing on-time deliveries of the full fleet of 15 helicopters.

A member of the H135 family of light twin-engine helicopters, the EC135T2+ is an ideal training platform, and initial flying activities have commenced at their new home in Nowra, Australia.

“Airbus Helicopters is proud to know that Boeing has accepted now all 15 of their new EC135T2+, on time and on budget, for their world leading helicopter aircrew training system for the ADF”, said Peter Harris, Head of Governmental Sales for Australia – Pacific. “Following contract signature in November of 2014, and in the space of only two years, we have trained the initial cadre of Boeing and Commonwealth aircrew and technicians and all 15 aircraft have now been accepted”.

Boeing’s HATS Director Terry Nichols said that the Boeing team is very happy with the performance thus far of the EC135 and commended Airbus Helicopters for their on-time delivery.

“Boeing Defence Australia chose the EC135 as our preferred helicopter solution for HATS; it’s a proven and reliable platform. We have been delighted with the cooperation from Airbus Helicopters to deliver these platforms that will form an important part of a world class training system.”

The EC135T2+ is a consummate military training helicopter, offering a glass cockpit with high visibility, a multi-axis auto-pilot, the performance and safety of a twin-engine helicopter replacing current single types, plus other advanced technologies to help instructors perform training missions safely and provide the ADF with the flexibility to undertake additional missions. The H135 family is part of successful training systems in Germany, Switzerland, Spain and Japan, and has recently been selected in the United Kingdom.

Airbus Helicopters has delivered around 1,200 H135s to customers around the globe who have logged a total of more than four million flight hours. The H135 is the unbeaten market leader in light, twin-engine, multi-purpose helicopters. Traditional missions for this class of helicopters include military training but also emergency medical services, law enforcement, VIP and business passenger transport, and maintenance of industrial wind parks.