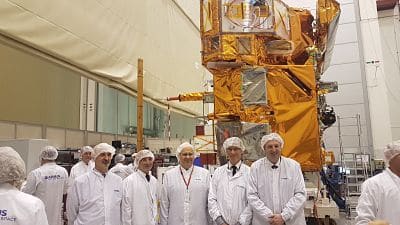 As a threefold fleet of EUMETSAT´s polar orbiting meteo satellites, MetOp measurements will further improve weather forecast and climate resarch
Airbus is preparing the next generation of weather satellites, MetOp-SG (Second Generation) and has made a presentation in April 2018 to the press.

The MetOp-C meteorological satellite is getting ready for upcoming launch in order to join its siblings and further improve the quality of observations and data provided for weather forecast.
Built by Airbus, MetOp-C is the last of the first generation of EUMETSAT Polar System (EPS) series of three polar-orbiting satellites, and is planned to be launched on September 18, 2018, from European Space Center in Kourou, French Guyana, aboard a Soyuz rocket.
The MetOp programme has enhanced the accuracy of weather forecasting and allowed extending the short term forecasts by one day.
“MetOp satellites are technologically advanced and their instruments are still state-of-the-art,” said EUMETSAT Director-General Alain Ratier. “We are in the fortunate and unexpected position soon having three MetOp’s in orbit at the same time, because MetOp-A, which was launched in 2006, has exceeded its five-year design life time by far and will remain in orbit until 2022.”
“Building on the successful operation and exceptional longevity of the MetOp satellites, we are still happy to have been entrusted the preparation of MetOp-SG, the next generation of Low Earth Orbit Meteorological satellites for EUMETSAT and ESA”, said Mathilde Royer Germain, Head of Earth Observation, Navigation and Science at Airbus, during a presentation of the satellite to the press.
The MetOp satellites have been developed by Airbus Defence and Space for the European Space Agency (ESA) and EUMETSAT, the European Organisation for the Exploitation of Meteorological Satellites, and are part of a joint Europe-US cooperation.
Initially, the plan was for each satellite to replace its predecessor, however, the excellent performance of the first two MetOp satellites allows them to be operated simultaneously, providing the meteorological community with increased data.

The forthcoming launch of MetOp-C will further improve the quality of observations and data provided for weather forecasts.