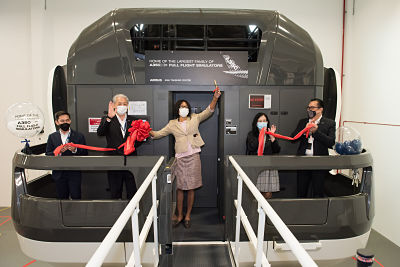 Singapore,  17 February 2022 – The Airbus Asia Training Centre (AATC) has inaugurated its fourth A350 Full Flight Simulator (FFS). This sees AATC offer more A350 simulator capacity than any other training centre in the world.

The addition also consolidates AATC’s position as the largest Airbus-operated flight crew training centre in the company’s global network, with two A320, two A330, one A380 and four A350 simulators. AATC also hosts one ATR 72-600 FFS.

The focus on the A330, A350 and A380 reflects the popularity of Airbus widebody aircraft in the Asia-Pacific region, with nearly 900 in service and around 220 currently on order for future delivery.

AATC is a joint venture owned 55% by Airbus and 45% by Singapore Airlines (SIA). At almost 10,000 square meters in size, thefacility at Seletar Aerospace Park is part of the Airbus Flight Training Network and serves the Asia-Pacific region and beyond. Since operations began in April 2016, AATC has successfully attracted 69 airline customers. AATC has the capacity to offer type rating and recurrent training courses for up to 10,000 trainees per year.

SIA is also the world’s largest operator of the A350, with 58 aircraft in service across its network as of February 2022. In addition, SIA has confirmed its purchase of seven A350F freighter aircraft. In tandem with its partner, AATC’s build-up of A350 flight crew training capacities are a response to an increasing demand from airlines customers in the region.

“The Asia-Pacific region has traditionally been the largest market for Airbus widebody aircraft. This has been further confirmed with the success of the A350 which is now flying with 16 airlines from the region. Our joint investment with SIA to offer comprehensive flight crew training services nearer to the home bases of airlines in the region has been extremely well received. We are pleased to continue our successful partnership at AATC,” said Valerie Manning, Senior Vice President, Airbus Training & Flight Operations Services.“As the world’s largest operator of the Airbus A350, SIA views AATC as a centre of excellence for A350 pilot training. Our strategic partnership continues to grow as the demand for air travel is picking up. AATC’s latest A350 Full Flight Simulator will continue to help SIA and other operators keep pace with the latest training requirements, while supporting Singapore’s position as a leading aviation hub,” said Captain Quay Chew Eng, Senior Vice President Flight Operations, Singapore Airlines.