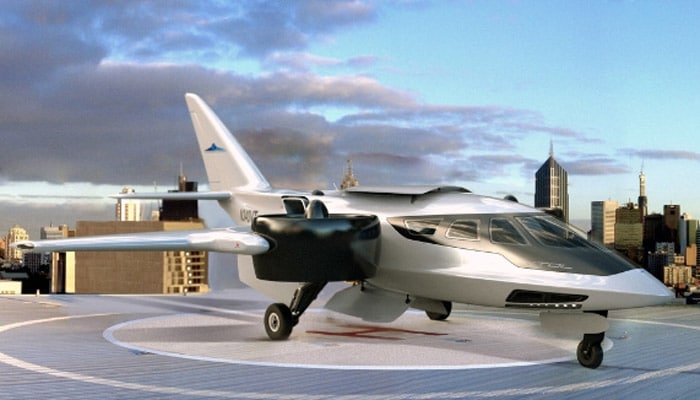 The six-seat TriFan 600 will have the speed, range and comfort of a business jet and the ability to take off and land vertically like a helicopter. Using three ducted fans, the aircraft will lift off vertically and its two wing fans rotate forward for a seamless transition to cruise speed, at 400 miles an hour and a range of up to 1,600 miles.

The 10 percent model will provide important aerodynamic data and demonstrate how helicopter flight control laws apply to the TriFan configuration, according to Dr. Dennis Olcott, XTI chief engineer and board member. After flying the 10 percent scale model, XTI will build an operational propulsion jet stand to house the engine, drive train system, fans and flight controls. Once these important milestones are reached, XTI will complete development of the two-thirds piloted flying prototype.

According to Olcott, Scion and SUAS were selected for their prototype development, digital flight control and composites manufacturing expertise, and experience working with the U.S. Navy to develop and demonstrate the 1,200-pound SA-400 Jackal optionally piloted helicopter system. This experience will be important as SUAS develops the software and flight controls that will drive the TriFan 600 piloted prototype.

XTI launched its Reg A+ stock offering earlier this year and raised $1.2 million from over 700 individual investors. When the company didn’t reach the minimum of $3 million by April 30, it refunded the investments and temporarily suspended the offering. However, since April 30, hundreds of the original investors and new potential investors have again reserved shares, and XTI has refiled with the SEC with no minimum required.

XTI is seeking to repeat or exceed the investment level reached previously, and XTI shares are once again available for purchase at: www.startengine.com/startup/xti

XTI Aircraft Company is a privately owned aviation business based in Denver. So XTI is guided by a leadership team with decades of experience, a deep well of expertise, and success bringing new aircraft to market. XTI is founded on a culture of customer-focused problem solving to meet the evolving needs of modern travelers.

For information and updates about XTI Aircraft Company and the TriFan 600, visit www.xtiaircraft.com. To invest, go to www.startengine.com/startup/xti

Be the first to comment on "XTI Aircraft Re-Opens Investments; Takes Steps Toward Flying Prototype"