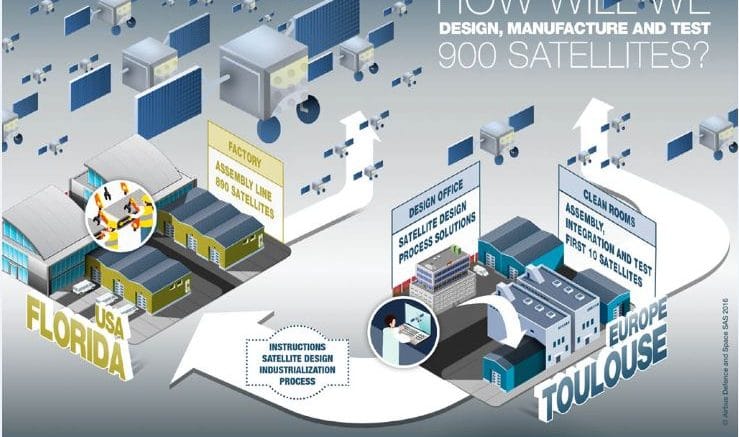 What next after OneWeb filing for Chapter 11 bankruptcy on Friday March 27th, 2020 ?

OneWeb is one of several companies looking to revolutionize the high speed low latency Internet deployment over the world : their aim is to provide high speed low latency Internet access all over the world thru hundreds or thousands satellites circling at Low Earth Orbit (LEO), allowing each laptop or each connected object to be simply linked to the satellite just above.

High pressure on cost thanks to satellite standardization and mass production was deemed to allow a satellite unit cost at $ 500 000.

All this was summarized by Patrice Caine, Thalès CEO with the comment on Feb. 23rd, 2020: “Today, to invest in OneWeb, you really have to believe in it”.

Airbus decided several years ago to participate to this project. Airbus owns 8% of OneWeb and is associated in OneWeb Satellite company building satellites for mass production. Despite all efforts and design and manufacturing rationalization, satellite unit cost is said to have increased to $ 900 000.

Arianespace (joint venture between Safran and Airbus) is also involved in the launch of these satellites as Arianespace has won a call for tender in 2015 in order to perform 21 launches. And another Arianespace contract with OneWeb was planning further launches with the new Ariane 6. As recent as during the night from February 6th to 7th 2020, a Soyouz launcher operated by Arianespace sent 34 OneWeb satellites into orbit. Arianespace is said to be a OneWeb creditor up to $ 217 million and have 18 launches remaining to perform.

With four rounds of funding, OneWeb got $3 billion up to March 2019. Due to delays and additional costs, the company has been seeking new funding since the start of 2020 but was unable to finalize the deal with Softbank, its major shareholder. Corona virus may have had some impact on this outcome.

OneWeb went to bankruptcy filing on late Friday March 27, 2020. The company is also laying off some employees as it seeks to restructure its business. The company said it laid off about 450 employees out its 531 headcount prior to filing for bankruptcy.

What next ? Who can invest in OneWeb or buy some parts of OneWeb ?

As a significant shareholder of Arianespace, Safran has an interest in OneWeb continuing its operations but it may not be sufficient for Safran to invest  as it is far from its core business and Safran has to face difficult time with no engine delivery to Boeing due to the B737 grounding as well as a reduced engine delivery to Airbus A320 production line hit by Coronavirus impact.

Airbus may be interested to salvage its satellite business (belonging to ailing Airbus defense and Space division) as well as its launch business thru Arianespace. But the recent crisis due to Coronavirus on airlines and airplane deliveries, the planned significant investments in Bombardier for the Airbus A220, the Airbus share price going from 130 € to as low as  50 €  between January 2020 and today are obstacles which may prevent this investment move.

Some are saying a global Internet network is “strategic” and for this reason OneWeb project should be continued in some form. In the mind of many private businessmen, a “strategic” project means losing a lot of money on a project, unless it is  decided and funded by states.

OneWeb, in a news release announcing the bankruptcy filing, said it plans to “pursue a sale of its business in order to maximize the value of the company.”  Let’s see. David Gilmar for AeroMorning