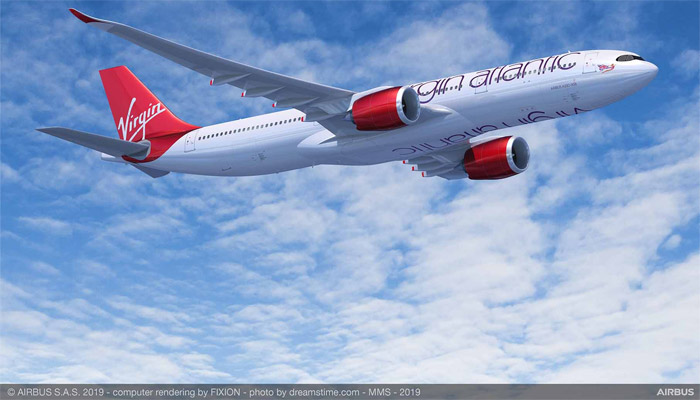 The A330neo Family is the new generation A330, comprising two versions: the A330-800 and A330-900 sharing 99 percent commonality. It builds on the proven economics, versatility and reliability of the A330 Family, while reducing fuel consumption by about 25 percent per seat versus previous generation competitors and increasing range by up to 1,500 nm compared to the majority of A330s in operation.

The A330neo is powered by Rolls-Royce’s latest-generation Trent 7000 engines and features a new wing with increased span and new A350 XWB-inspired Sharklets. The cabin provides the comfort of the new Airspace amenities including state-of-the-art passenger inflight entertainment and Wifi connectivity systems.

Airbus is a global leader in aeronautics, space and related services. In 2018 it generated revenues of € 64 billion and employed a workforce of around 134,000. Airbus offers the most comprehensive range of passenger airliners. Airbus is also a European leader providing tanker, combat, transport and mission aircraft, as well as one of the world’s leading space companies. In helicopters, Airbus provides the most efficient civil and military rotorcraft solutions worldwide

Azul receives the first Airbus A330neo in the Americas