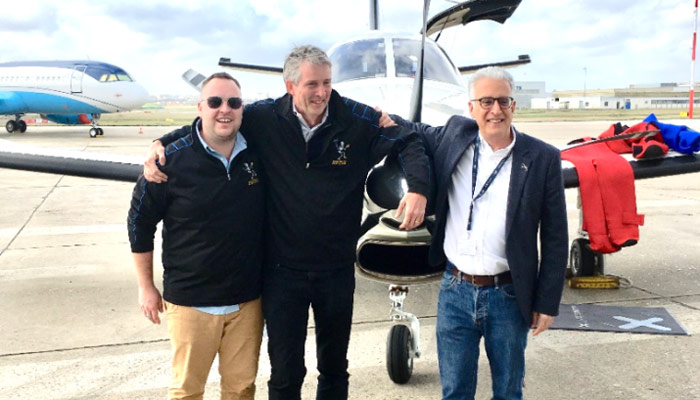 Flying the TBM 930 owned by Reuter, they crossed the Atlantic Ocean in 8 hours and 38 minutes with an average speed of 364 kts., taking off from Westchester County Airport (KHPN) north of New York City, and landing at the historic Le Bourget Airport (LFPB) near Paris – where Charles Lindbergh landed after his pioneering transoceanic crossing.

The TBM 930 beat the previous 325.2-knot record in the C1e category (turboprop aircraft with a maximum takeoff weight under 13,200 lbs./6,000 kg. as established by the Fédération Aéronautique Internationale), which was held since 1985 by the renowned test pilot, Chuck Yeager, on a twin-engine airplane.

“You are true trailblazers,” stated Daher CEO Didier Kayat, who greeted them at the airport. “With a spirit of true pioneering aviators, combined with extensive preparations, you demonstrated our TBM aircraft’s capabilities – and beat the previous record by nearly one hour. What a performance!”

Planning for the speed record attempt took the crew one year and included such elements as weather prediction over the Atlantic, definition of a route within commercial air traffic corridors, and technical aspects.

“It was 366 days ago when we first discussed the potential of attempting an around-the-world speed record with the Daher team, which suggested that we could begin with a transatlantic speed record,” Reuter explained. “After a detailed examination, we found that the current record in the TBM aircraft category was achievable.”

The weather analysis was facilitated by the use of custom-built software created by Reuter, which provided good estimation of favorable winds. His TBM 930 was equipped with a custom-made fuel tank to carry 300 U.S. gallons of jet fuel – bringing the aircraft’s total usable fuel quantity to 600 U.S. gallons, ensuring more than 10 hours of flight time.

The additional fuel increased the TBM 930’s 7,398-lb. maximum certified takeoff weight to 9,200 lbs., which required an approval from the U.S. Federal Aviation Administration. The FAA’s authorization was issued just a few days before the flight, which took off from Westchester County Airport at midnight on March 8.

“My thanks go to those involved in obtaining the airworthiness approval, in particular Joe Robbins from the Rice Lake TBM Service Center, who was instrumental in dealing with the FAA,” Reuter added.

For traffic management, Reuter and Bozek were assisted by air traffic control agencies, primarily from Canada’s NavCanada and the French DGAC civil aviation authority and its navigation services, to obtain the most direct routes. In addition, the TBM 930 was equipped for satellite communications and inflight tracking using an Iridium GO! device, and with dedicated support from Iridium Communications. This enabled them to stay in permanent contact with transoceanic control centers.

“After encountering moderate winds during the first part of the trip, we experienced very favorable winds later, which propelled us at astonishing ground speeds up to 458 knots,” explained Bozek.

They landed at Le Bourget Airport 2:38 p.m. on March 9, having consumed a total of 520 U.S. gallons – near to the previsions – with sufficient fuel remaining to reach an alternate airport if needed.

Upon their arrival, they were welcomed at Luxaviation lounge, and its partner of the SkyValet handling agent. Greeting them were Daher executives, as well as Jacques Lemaigre du Breuil, a winner of the Lindbergh trophy who flew a similar New York-Paris trip 25 years ago in a TBM 700 at an average speed of 287 kts.

Reuter, 58, is a Chicago-based global finance expert and currently flies his TBM 930 after owning a TBM 850 version for nearly 10 years. He has amassed 4,500 flight hours, half of which have been logged while operating his two TBM aircraft throughout the world – including an exciting trip to Antarctica in December.

The 31-year-old Bozek is a Michigan-based serial entrepreneur and real estate investor who has the distinction of being the youngest owner of a Daher TBM very fast turboprop aircraft. Bozek has flown nearly 3,400 hours (including 800 in his TBM 900) and is a passionate aviator that frequently flies aerobatics and formation demonstrations using his own collection of piston-engine and turbine-powered warbirds.

Nicolas Chabbert, the Senior Vice President of Daher’s Airplane Business Unit, saluted Reuter and Bozek for their achievement. “These two pilots have joined others in making aviation history, and are pleased they demonstrated the real capabilities of our very fast turboprop aircraft in setting this new record.”

About the Daher TBM – www.tbm.aero

The TBM 910 and TBM 930 are the current members in Daher’s TBM family of very fast single-engine turboprop aircraft. Differences between the two models are concentrated on their primary avionics: Garmin’s G1000 NXi avionics system with physical keypad for the TBM 910; Garmin’s G3000 with touchscreen controller for the TBM 930, which will be replaced this spring by the TBM 940, which was launched by Daher last week.

Both aircraft offer superior performance – a maximum cruise speed of 330 kts. – and high efficiency with a 1,730-naut. mi. maximum range and a fuel consumption at economy cruise of 37 U.S. gallons per hour. This results from aerodynamic improvements, along with other aircraft enhancements. The maximum range and useful load, as well as the ability to land at small airports, are some of the customers’ favorite features.

To date, a total of 929 TBM aircraft have been delivered to international owners and operators, with the global fleet accumulating some 1.6 million flight hours. 267 TBM 900-series have been delivered through December 31, 2018. They are built by Daher on its industrial site at the airport of Tarbes-Lourdes-Pyrénées (Hautes Pyrénées), France.

Daher is an aircraft manufacturer and an industry and service equipment supplier. Daher asserts its leadership in three main businesses: aircraft manufacturing, aerospace equipment and systems, logistics and supply chain services; and achieved a turnover of 1.2 billion euros in 2018. With the stability provided by its family ownership, Daher has been committed to innovation since its creation in 1863. Today, present in 12 countries, Daher is a leader in Industry 4.0, designing and developing value-added solutions for its industrial partners.

Based in Paris – Le Bourget Luxaviation France is the main Business Aviation Operator in the country andis a partner of SkyValet fixed-based operator (FBO) which operate handling activity. Sky Valet is the FBO brand of “Aéroports de la Côte D’Azur” group and represents a network of 27 FBOs located at the most iconic destinations in France, Spain, Italy, Bulgaria and Portugal.

Luxaviation France is a part of Luxaviation Group which is one of the largest private aircraft operators in the world. It is comprised of Luxaviation Helicopters, Starspeed and some of the world’s leading business aviation entities including ExecuJet.

The Group offers a wide range of services including aircraft management for private and commercially registered aircraft, charter, maintenance and fixed-base operations (FBOs).