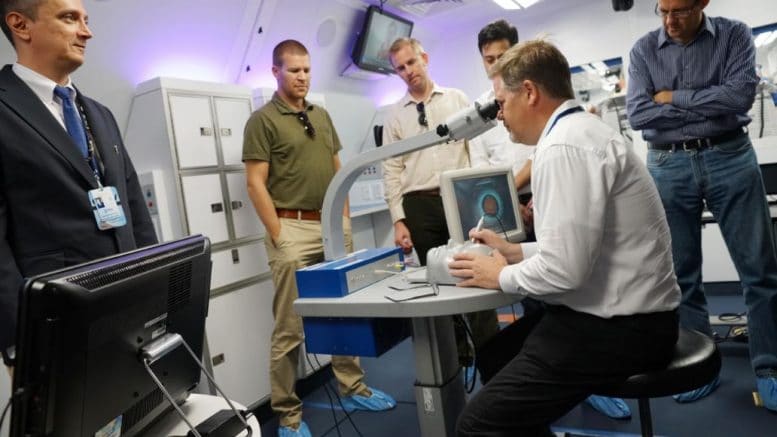 Orbis, a non-profit organization that fights blindness around the world and based in New York, operates the Flying Eye Hospital, the world’s only mobile ophthalmic teaching hospital on board an MD-10 aircraft, taking the very latest ophthalmological knowledge and surgical skills to local hospitals around the world.

The aircraft, an MD-10-30CF was previously operated by FedEx who subsequently donated it to Orbis. Today the aircraft is flown by a team of volunteer FedEx pilots.

saf-Tglo® is the emergency exit marking solution of choice for leading aircraft manufacturers and airlines worldwide, and is the highest performing, lightest and most discrete photoluminescent system available. The selection of saf-Tglo® on the new Orbis Flying Eye Hospital demonstrates the versatility of the product and how it can be applied to a variety of different applications – not just commercial aircraft.

Fitted with SuperSeal Lite®, the Orbis Flying Eye Hospital has selected the narrowest, lightest and most discrete floor path marking solution available, complete with a blue insert to complement the aircraft’s interior.

The completely sealed, hard-wearing, long-lasting system is approved and certified for installation on virtually every type of aircraft.  It requires no power source and is fully charged by the cabin lighting within minutes. 100% reliable, saf-Tglo® significantly reduces the maintenance and operational costs associated with traditional electrical systems and being much lighter, improves the aircraft’s fuel efficiency.

Marcus Williams, Director of Sales & Marketing of STG Aerospace, commented: “We are delighted to be contributing to the safe and effective operation of the Orbis Flying Eye Hospital, which delivers the skills, resources and knowledge needed to deliver quality eye care. This project is also a further example of STG Aerospace’s involvement in supporting airborne medicine having already supplied photoluminescent solutions for a UK helicopter-based emergency medical service.”