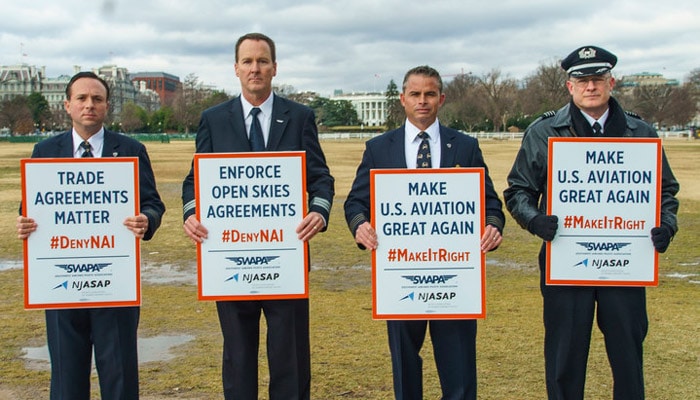 WASHINGTON, Jan. 25, 2017 /PRNewswire-USNewswire/ — The NetJets Association of Shared Aircraft Pilots (NJASAP) and Southwest Airlines Pilots’ Association (SWAPA) took the fight to protect U.S. aviation and the tens of thousands of jobs it supports to the Trump administration’s doorstep. More than 140 pilots, flight attendants, and mechanics rallied in front of the White House yesterday afternoon to urge the Trump administration to reverse an eleventh-hour Obama administration decision to grant a foreign air carrier permit to Norwegian Air International (NAI).

“Simply put, President Trump is all that stands between the U.S. aviation industry and a scheme by a foreign air carrier to undermine it,” NJASAP President Pedro Leroux said. “Our members gathered in the nation’s capitol to urge the president to reverse an egregious DOT decision that puts both the safety of the flying public and middle-class American jobs squarely in the crosshairs.”

The #MakeItRight Pilot Support Rally did not go unnoticed: Inquiries from media outlets leading up to and during the rally signaled a critical turning point for the issue. “Our call to ‘deny NAI’ has received more coverage in the past 24 hours than it has in more than two-and-a-half years,” SWAPA President Capt. Jon Weaks said. “From every indication, the media sees this as a story that fits within President Trump’s pro-worker narrative, and the independent Southwest and NetJets pilot unions could not agree more.”

In late December, the DOT granted a foreign air carrier permit to NAI despite violating Article 17 bis of the U.S.-EU Open Skies Agreement and threatening a vital American industry. With its access to the U.S. aviation marketplace secured, Norwegian is now positioned to set into motion a flag-of-convenience scheme that allows it to forum shop the globe for the cheapest labor, the least restrictive regulations, and the choicest tax laws. 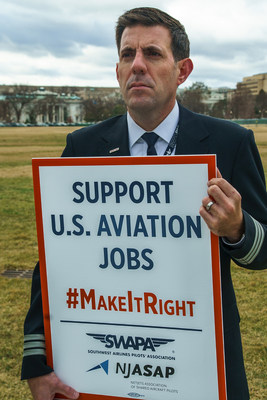 “Article 17 bis was specifically included in the Open Skies Agreement to prevent the very scenario Norwegian is now set to perpetrate ? shopping the globe for the cheapest possible labor,” Weaks said. “This atrocious action by the Obama Administration has unilaterally undermined every trade agreement the U.S. has ever signed, including the Open Skies agreements we have with more than 100 countries across the globe.” He continued, “The former administration not only violated trade policy, but also turned its back on the tens of thousands of American workers employed in the aviation industry.”

Union leaders agree the outpouring of member support for the rally demonstrates the grave nature of a very bad trade deal and its implications for professional aviators. “Our members have sent a very powerful message,” Leroux said. “Pilot families have taken this issue to heart, and they are prepared to fight this anti-worker policy from one side of the beltway to the other.”

Added Weaks, “President Trump campaigned on a pro-worker platform, and we are calling on him to keep the bottom from falling out of our industry by prioritizing American aviation worker interests over those of foreign corporations and their executives.”

About NJASAP Established in 2008 as an independent labor advocate, NJASAP represents the professional interests of the 2,700-plus pilots who fly in the service of NetJets Aviation, Inc. For more information, visit our web site, www.njasap.com, Facebook page, www.facebook.com/njasap, or Twitter feed, @njasap.

Be the first to comment on "Southwest, NetJets pilots urge Trump to save U.S. aviation jobs, deny NAI"