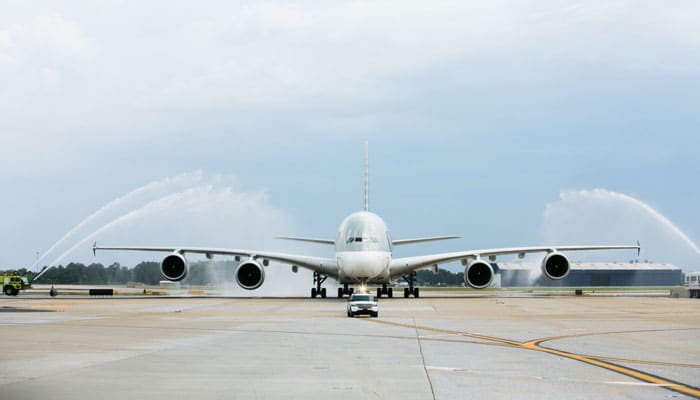 Qatar Airways brought their long-awaited, first commercial flight to Atlanta, as the airline commenced daily, non-stop service between Hartsfield-Jackson International Airport (ATL) and Hamad International Airport (DOH) in Doha. Skytrax’s reigning “Airline of the Year” marked the occasion by operating the inaugural flights with one of the airline’s super jumbo Airbus A380 aircraft. The inaugural inbound and outbound flights were at full capacity, filling 517 seats, demonstrating the need and desire for new international service to and from Atlanta.

“From our very first flight, we see that our services are essential to this city,” said Qatar Airways Group Chief Executive, His Excellency Mr. Akbar Al Baker. “Even in a major aviation hub such as Atlanta, we are broadening the horizon and giving seasoned business and leisure travellers convenient access to many new and important destinations around the world. Atlanta is home to dozens of Fortune 500 companies that conduct business around the world ? businesses that need the convenience only our flight, with connections in Doha, can provide.”

Qatar Airways’ home and hub, Hamad International Airport, offer geographic advantages other airlines and alliances cannot; the carrier is based in Doha, within six hours of 80 percent of the world’s population. With its extensive network throughout Asia, the Middle East and Africa, Qatar Airways flights can reduce overall flying time by hours.

“We look forward to welcoming our newest airline partner this week,” interim Airport General Manger Roosevelt Council, Jr. said today. “Expanding opportunities for our customers and growing our international reach is one of our top goals. Qatar Airways allows us to accomplish just that.”

The first Qatar Airways departure proves the point: Hundreds of passengers on the first flight from Atlanta took advantage of convenient connections to reach more than 40 destinations out of the airline’s global network of over 150 cities. The majority of connecting passengers flew on from Hamad International to India, Southeast Asia and African destinations, such as Nairobi, Addis Ababa, Asmara, and Khartoum.

“Our vision for Qatar Airways and Hamad International has always been as a global hub, seamlessly spanning continents and facilitating world travel,” continued Mr. Al Baker. “The world becomes far more accessible with this kind of global network, and we at Qatar Airways want to take the journey with you, and make the travel as rewarding and memorable as the destination.”

Qatar Airways is one of the fastest growing airlines in aviation history, taking on average one new aircraft every 10 days. To help support this growth, Qatar Airways will host a recruitment drive for their award-winning and iconic cabin crew in Atlanta starting in July. Dates will be announced shortly.

Interested applicants can learn more about working for Skytrax’s three-time Airline of the Year by visiting the airline’s web site at www.qatarairways.com. Qatar Airways offers competitive, tax-free salary, housing, medical insurance and other perks, in addition to the opportunity for rapid career advancement.

The introduction of daily wide-body Boeing 777 passenger flights provides additional belly-hold capacity to the cargo carrier’s existing four-times weekly freighter services between Doha and Atlanta. The carrier now offers a combined 544 tonnes of capacity per week on its Doha–Atlanta–Doha route, meeting the robust demand of the destination.

About Qatar Airways:Qatar Airways, the national carrier of the State of Qatar, is one of the fastest growing airlines operating one of the youngest fleets in the world. Now in its 19th year of operations, Qatar Airways has a modern fleet of 185 aircraft flying to more than 150 key business and leisure destinations across six continents. Qatar Airways won Airline of the Year, Best Business Class Airline Seat and Best Airline in the Middle East at the 2015 Skytrax Awards. This is the third time the airline won the accolade of Airline of the Year.

Qatar Airways is a member of the oneworld global alliance. The award-winning alliance was named the World’s Best Airline Alliance 2015 by Skytrax for the third year running. Qatar Airways was the first Gulf carrier to join global airline alliance, oneworld, enabling its passengers to benefit from more than 1,000 airports in more than 150 countries, with 14,250 daily departures.

In 2015 Qatar Airways launched Oryx One, an enhanced interface for its inflight entertainment system, increasing the number of movies and TV shows on board from 950 to up to 3,000. Passengers flying on Qatar Airways flights served by its B787, A350, A380, A319 as well as select A320 and A330 aircraft can also stay in touch with their friends and family around the world by using the five-star airline’s on-board Wifi and GSM service.

Be the first to comment on "Qatar Airways Lands In Atlanta"