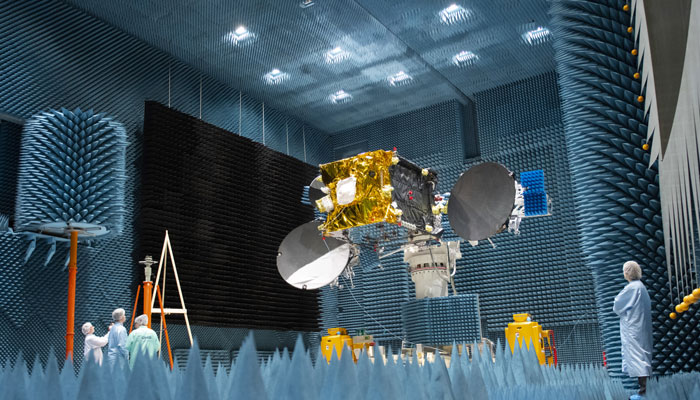 The latest component in the European Data Relay System (EDRS) has passed another important milestone. Tests have successfully concluded on the antennas of the EDRS-C satellite.

EDRS—dubbed the “SpaceDataHighway” by its private operator, Airbus—allows the transmission of large quantities of data with reduced delay, using laser communication technology.

Earth-observing satellites typically circle the planet every 90 minutes and normally relay the information they have acquired only when they are in a direct line-of-sight with a ground station.

With EDRS, the Earth-observing satellites can transmit this information via laser links to the relay satellites, which are in much higher orbits and are in constant sight of their ground stations.

The EDRS satellites can then immediately relay the information back to Earth, using radio waves and one of the antennas in question.

EDRS is a public-private partnership between ESA and Airbus, with significant investment by the German Space Administration DLR. The latest satellite, EDRS-C, is based on the SmallGEO platform developed by Bremen-based space company OHB System AG under another partnership project with ESA.

The testing of the antennas took place at Airbus’s Compact Antenna Test Range (CATR) facility in Ottobrunn, Germany, which mimics how the satellite will perform in space.

The CATR facility is able to simulate the long distance travelled by the radio waves by repeatedly bouncing them off two large reflectors, before sending them to the receiver. With the exception of the two large reflectors, the inner walls of the facility are covered in pyramids of foam, to prevent any reflections of the radio waves and thereby simulating the space environment.

The facility was also used to test the antennas of HYLAS 3, which is designed to provide Ka-band satellite communications, and will be launched on EDRS-C. HYLAS 3 is owned by Avanti Communications.

Engineers confirmed that the EDRS and HYLAS 3 antennas and the rest of the communication payloads worked well together and that there was no interference between them.

Once EDRS-C has passed its final tests, it will be shipped to Kourou in French Guiana for launch in the summer.