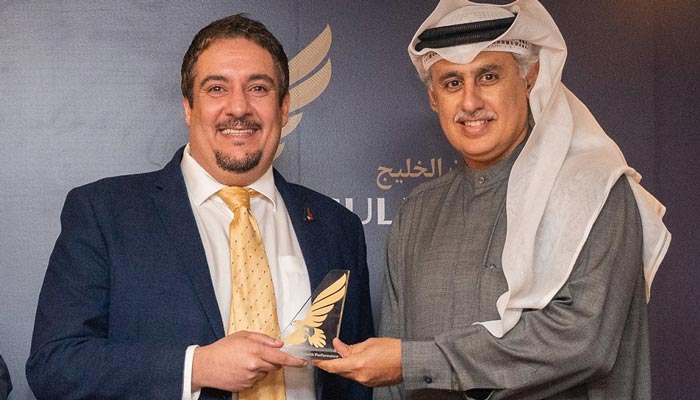 Mr. Al Gaoud has been part of the Gulf Air family for 16 years, in which he was the first Bahraini country manager for the United Kingdom which he served for 6 years; one the airline’s most successful sectors with double daily flights on its new Boeing Dreamliner 787-9.

“I began working in Gulf Air in 2003 and was enrolled in the company’s management training programme, which was designed to develop Bahrainis for management roles, and have been guided by the company continually to develop my career to become country manager of the airline’s most successful station.” Mr Al Gaoud added at the announcement of his promotion, “I am honored that the airline continues to give, not only the training and guidance to Bahrainis, but also opportunities for us to put those skills into practice in management positions. I look forward to moving back to Bahrain and continuing my development and working for our national carrier in its new dynamic era and contributing to its future growth plans.” Mr. Al Gaoud has proudly represented the Kingdom of Bahrain in the United Kingdom and set record revenue and passenger numbers last year. He has also worked closely with Bahrain Tourism and Exhibition Authority increasing tourist numbers to the Kingdom of Bahrain from the United Kingdom, which also reported record figures in 2018.

Gulf Air, the national carrier of the Kingdom of Bahrain, commenced operations in 1950, becoming one of the first commercial airlines established in the Middle East. Today, Gulf Air is a major international carrier serving 47 cities in 26 countries.

The airline operates double daily flights or more to 10 regional cities, in addition to select destinations in the Indian Subcontinent and Europe, from its hub at Bahrain International Airport. Gulf Air currently serves all its destinations with a combination of wide and narrow body fleet of 34 aircraft. The airline received 5 Boeing 787-9 Dreamliner’s and 1 Airbus A320neo aircraft in 2018. In 2019 the airline will further receive 2 Dreamliner’s and 4 A320neos in 2019. The modern fleet will herald a new era for Gulf Air as it continues to enhance its product and service offering. Renowned for its traditional Arabian hospitality, evidenced by the airline’s signature family and business friendly products, Gulf Air is committed to being an industry leader and developing products and services that reflect the evolving needs and aspirations of its passengers.

Gulf Air connects Bahrain to the world and, as such, is a key national infrastructure asset, serving as a powerful driver for the economy and supporting the Kingdom’s on-going economic growth. With its mobile app and Bahrain stopover programme, the airline promotes Bahrain as a tourist destination to the world.