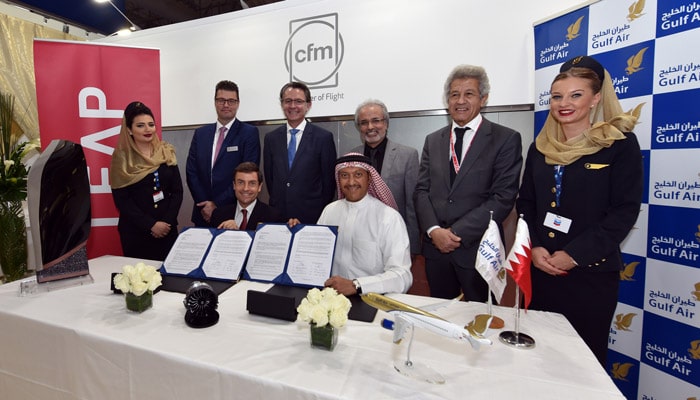 DUBAI, U.A.E. — 12 November 2017 — Gulf Air and CFM International today signed an agreement for the purchase of 58 LEAP-1A engines to power 17 Airbus A321neo and 12 A320neo aircraft, as well as an additional seven spare engines to support fleet operations. The engine order is valued at approximately $1.9 billion U.S. at list price, including a long-term service agreement. The aircraft order was announced in January 2016.

To support its fleet, the airline has signed a 10-year Rate Per Flight Hour (RPFH) agreement. Throughout the term of the agreement, CFM guarantees maintenance costs for all of Gulf Air’s LEAP-1A engines on a dollar per engine flight hour basis.

Gulf Air has been a CFM customer since 1992 and currently operates a fleet of 16 Airbus A320ceo aircraft powered by CFM56-5B engines. Going forward, the airline will welcome 17 new Airbus A321neo and 12 A320neo aircraft, along with 10 Boeing wide-body aircraft due to begin delivery in early 2018. Gulf Air’s incoming fleet will facilitate the long-term expansion capabilities for the airline’s future network requirement. The modern fleet will herald a new era for Gulf Air as it continues to enhance its product and service offering.

Marking the announcement, Gulf Air Deputy Chief Executive Officer, Captain Waleed Abdulhameed Al Alalawi, said: “CFM International are a key and long-standing partner for Gulf Air, with whom the airline has worked closely for over two decades. Our selection of this engine for our incoming Airbus aircraft is significant, reflecting the reliability and expertise afforded by CFM products. This is integral to our ongoing strategic development and I am pleased to call CFM International Gulf Air’s partner of choice as we move ahead with our long-term plans to shape the future trajectory of our carrier.”

“It is highly gratifying when an airline of this stature makes your products such an essential part of its operations,” said Gaël Méheust, president and CEO of CFM International. “We are honored to be a part of this team and to be a part of Gulf Air’s continued growth and success. The CFM56-5B engines they currently operate have performed very well over the years. We know that the LEAP-1A engines will bring even greater benefits and we can’t wait to help them induct this advanced technology into their fleet.”

The LEAP engine entered commercial service in August 2016 and is providing its more than 20 operators with a 15 percent improvement in fuel efficiency, with an equivalent reduction in CO2 emissions; and lower noise and NOx emissions. To date, the fleet in service has logged nearly 200,000 engine flight cycles and 400,000 engine flight hours while maintaining CFM’s industry-leading reliability.

Gulf Air, the national carrier of the Kingdom of Bahrain, commenced operations in 1950, becoming one of the first commercial airlines established in the Middle East. Today, Gulf Air is a major international carrier serving 42 cities in 25 countries spanning three continents. The airline operates double daily flights or more to 10 regional cities, in addition to select destinations in the Indian Subcontinent and Europe, from its hub at Bahrain International Airport. Gulf Air currently serves all its destinations with a combination wide- and narrow-body fleet totaling 28 modern aircraft with orders for 39 new Boeing and Airbus aircraft due for delivery commencing in early 2018. The new fleet will herald a new era for Gulf Air as it continues to enhance its product and service offering. Renowned for its traditional Arabian hospitality, evidenced by the airline’s signature family- and business- friendly products, Gulf Air is committed to being an industry leader and developing products and services that reflect the evolving needs and aspirations of its passengers. Gulf Air connects Bahrain to the world and, as such, is a key national infrastructure asset, serving as a powerful driver for the economy and supporting the Kingdom’s on-going economic growth. Gulf Air has been the Title Sponsor of the FORMULA 1 GULF AIR BAHRAIN GRAND PRIX ever since it made history as the first Formula 1 Grand Prix to be held in the Middle East in 2004. In addition, the airline has been Official Carrier of the biennial Bahrain International Airshow since it was first held in 2010.

The LEAP engine is a product of CFM International, a 50/50 joint company between GE and Safran Aircraft Engines. This engine has experienced the fastest order ramp up in commercial aviation history and CFM has received orders and commitments for a total of nearly 14,000 LEAP engines across all three models through October 2017. For more information, visit us at www.cfmaeroengines.com or follow us on Twitter @CFM_engines.

Heavy toll for the partners of the C919

Be the first to comment on "Gulf Air, CFM sign a $1.9 billion LEAP-1A engine and services deal"