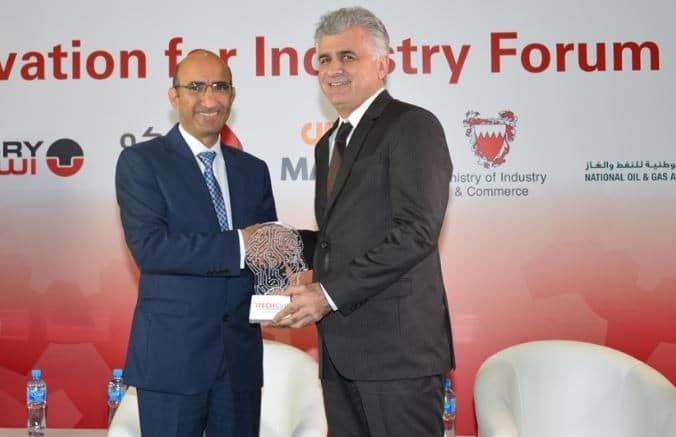 Manama, Kingdom of Bahrain – 14 March 2016: Gulf Air, the national carrier of the Kingdom of Bahrain, was recognized earlier this month at the iTECH 2016 Awards, held during Gulf Industry Fair 2016, which celebrated regional and international ICT (Information and Communications Technology) sector achievements in Bahrain.

Receiving the award for “Leading CIO,” Dr. Jassim Haji, Gulf Air Director of Information Technology said: “I’m delighted to receive this award – a true and fitting testament to the commitment, dedication and skills held by the national carrier’s Information Technology team and which have helped propel Gulf Air consistently to the forefront of industry innovations.”

This is the second iTECH Award recognition garnered by Gulf Air. The airline was recently honoured, for the third consecutive year, at the sixth edition of the Information and Communication Technology (ICT) conference “MEET ICT” and the Bahrain International Technology Exhibition (BITEX) – held in Bahrain earlier in January 2016. Additionally, Gulf Air recently won Computer News Middle East’s (CNME) annual, prestigious CIO 100 Award for the 4th consecutive year, becoming the first organization and first airline in the Middle East to do so.

Gulf Air’s IT achievements include being the first organization in Bahrain to implement Private Cloud Computing in its IT operations and thereby introduced numerous innovations and improvements in its IT function. In 2015, the airline successfully rolled out its new generation iPad Electronic Flight Bags (EFBs), thereby eliminating the need for paper-based manuals and procedures and going electronic to further improve flight operations and achieve major cost-savings.

About Gulf Air
Gulf Air, the national carrier of the Kingdom of Bahrain, commenced operations in 1950, becoming one of the first commercial airlines established in the Middle East. Today, Gulf Air is a major international carrier serving 39 cities in 22 countries spanning three continents. The airline operates one of the largest networks in the Middle East, with double daily flights or more to 10 regional cities, in addition to select destinations in the Indian Subcontinent and Europe, from its hub at Bahrain International Airport. Gulf Air serves all its destinations with a combination wide and narrow body fleet totalling 28 modern aircraft. Renowned for its traditional Arabian hospitality, evidenced by the airline’s signature family and business friendly products, Gulf Air is committed to being an industry leader and developing products and services that reflect the evolving needs and aspirations of its passengers.