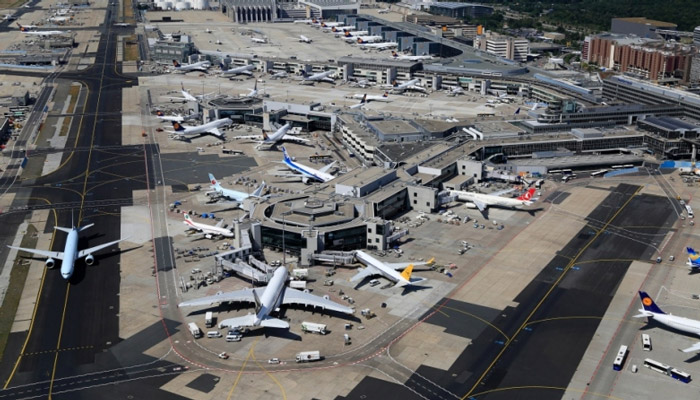 In 2016, Frankfurt Airport (FRA) served a total of 60,792,308 passengers, thus surpassing the 60 million passenger mark once again and remaining almost at the previous year’s level (down 0.4 percent). Following a slowdown in the summer period of 2016 caused by geopolitical factors, passenger traffic clearly picked up again towards the end of the year. Without weather and strike-related flight cancellations, passenger numbers would have risen by approximately 0.4 percent during 2016.

FRA’s cargo throughput (airfreight + airmail) advanced by 1.8 percent to some 2.15 million metric tons in 2016. While accumulated maximum takeoff weights (MTOWs) increased by 0.4 percent – reaching a new record level of about 29.7 million metric tons – aircraft movements declined by 1.1 percent to 462,885 takeoffs and landings in 2016. Without the effects resulting from strike and weather-related flight cancellations, the number of aircraft movements would have seen a decline of only 0.3 percent. The average number of passengers per flight continued to rise from a record 140.2 in 2015 to a noticeable 141.0 in 2016, reflecting the efficiency-enhancing consolidation activities of airlines.

Fraport AG’s executive board chairman, Dr. Stefan Schulte, said: “Despite a challenging environment, we were able to keep Frankfurt Airport’s passenger numbers at a stable level during 2016. Particularly in view of the recovery in passenger traffic towards the end of 2016, we are optimistic about the year ahead. In 2017, we will strengthen the low-cost segment and expect our traffic to grow again here in Frankfurt.”

In December 2016, almost 4.3 million passengers passed through Frankfurt Airport (up 3.9 percent). This represents a new December record for FRA, breaking the previous peak level of 2011. Cargo traffic, too, saw a particularly strong December month, with tonnage growing by 7.6 percent to 188,635 metric tons. This was driven by the recovery in world trade and a rise in demand for exports in the Euro zone stimulated by the weak euro, as well as the ongoing dynamic growth of the German economy. Maximum takeoff weights shrank by 0.5 percent to about 2.2 million metric tons in December 2016, while the number of aircraft movements remained stable at 33,941 takeoffs and landings.

Airports in Fraport’s international portfolio reported diverging traffic figures for the 2016 calendar year. Ljubljana Airport (LJU) in Slovenia received about 1.4 million passengers, down 2.3 percent compared to the particularly strong 2015 traffic year. Lima Airport (LIM) in Peru’s capital recorded a 10.1 percent rise in traffic, with a total of 18.8 million passengers served in 2016. The Fraport Twin Star airports of Varna (VAR) and Burgas (BOJ) on the Bulgarian Black Sea coast combined welcomed some 4.6 million passengers, thus achieving a 21.5 percent surge in traffic year-on-year. In Turkey, the country’s security situation as well as strained relations with Russia had a dampening effect on tourism and corresponding leisure air traffic. As a result, Antalya Airport (AYT) on the Turkish Riviera experienced a 30.9 percent decline in traffic to about 19 million passengers in 2016. Since the beginning of September 2016, when charter flights were officially restarted from Russia, AYT has seen a noticeable recovery trend in its Russian traffic. Pulkovo Airport (LED) in St. Petersburg, Russia, posted a 1.7 percent decline in traffic to 13.3 million passengers. In northern Germany, Hanover Airport (HAJ) also registered a slight drop of 0.8 percent to 5.5 million passengers. In contrast, China’s Xi’an Airport (XIY) achieved significant double-digit growth of 12.2 percent to 37 million passengers.

Taking in account the difficult framework conditions facing the industry, CEO Schulte expressed satisfaction with the full-year traffic results: “With the exception of Turkey, we have seen traffic stability or noticeable growth at all of Fraport’s airports during 2016 – particularly at Varna and Burgas, as well as Lima and Xi’an. This underscores our strategy of having a geographically diverse portfolio, whereby we consistently develop our airports in the various regions.”