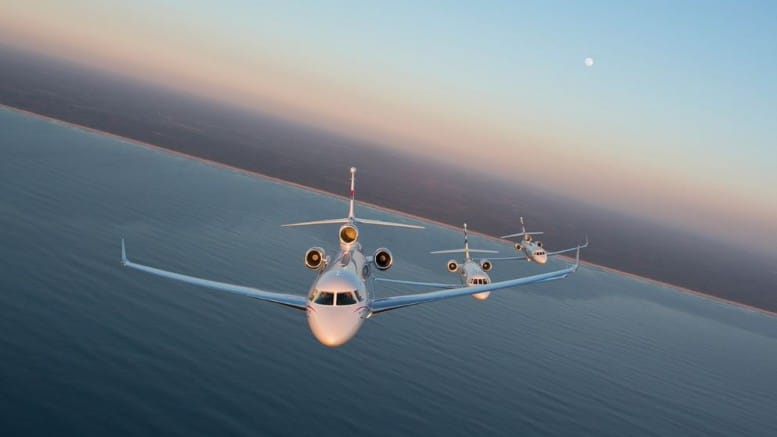 Dassault is the Indian market leader for large cabin, long range aircraft, with 22 aircraft currently in service and several more on order. This position stems in part from the Indian Air Force’s long experience with Dassault fighters, whose advanced technologies, notably digital flight control, served as the basis for that on the Falcon 7X.

“We expect the country’s accelerating economic growth to translate into rising Falcon sales going forward,” said Dassault Aviation Chairman/CEO Eric Trappier. “No other business jet line is more suited to local requirements, whether it be in terms of cabin design, flying performance, fuel economy or versatility, than Falcon.”

Dassault’s popular Falcon 2000 twinjet – now approaching the 600th production mark – accounts for the largest portion of the present Indian fleet. Sales are currently being driven by the Falcon 2000LXS, the newest edition in the 2000 line, which offers a short-field capability comparable to smaller midsize and super midsize business jet models but with a range and comfort level far better than these aircraft. This summer, the Falcon 2000 line will be certified to carry Dassault’s new FalconEye Combined Vision System option, allowing the LXS and the shorter range Falcon 2000S entry level jet to be offered with this revolutionary head up display, the first in the industry to meld synthetic and enhanced vision capabilities.
Bulk of New Sales Coming from Falcon 7X, 8X.

The majority of new Indian Falcon orders, however, are for longer range models like the Falcon 7X and the new ultra long range Falcon 8X that can fly non-stop from anywhere in India to destinations such as London City Airport that are typically off limits to big business jets.

The 6,450 nm/11,945 km Falcon 8X, which will feature the quietest and most comfortable cabin in business aviation, is due to be delivered to its first Indian operator by the end of 2016. The 8X will offer all the advanced technological features of the popular Falcon 7X, from which its is derived, including the industry’s leading digital flight control suite. It will also be certified with the advanced FalconEye Combined Vision System.

Set to be certified in mid-2016, the new trijet will offer the longest range of any Falcon along with the most extensive selection of cabin configurations available on any large cabin business jet. The three 8X’s in the flight test program have nearly completed all certification test requirements, having accumulated over 550 flight hours to date. This spring, s/n 03, the first 8X with a fully fitted interior, will undergo a global test campaign to demonstrate aircraft operational reliability and performance in different flight conditions. The month-long campaign will subject the aircraft to the extremes of what Falcon 8X customers might expect to face during its operational life and focus particular attention on the performance of cabin equipment and functionalities and other high speed communications systems, especially during long intercontinental flights.

Dassault also predicts strong demand among Indian customers for the all-new Falcon 5X very large body twin, currently in development. Due to enter service in 2020, the 5,200 nm/9,630 km 5X will offer the largest cabin cross-section of any business jet and the lowest ownership and operating costs in the 5,000 nm segment.
“The unmatched ability of Falcons to combine short and long haul flights and fly out of short hard-to-reach airstrips with full range performance – even at high altitudes and high temperature conditions – make them perfect for Indian operating conditions,” continued Trappier.

The deal with Ligare followed previous Authorized Service Center agreements with Taj Air/Metrojet, for the Falcon 2000 series, and Air Works India, for the Falcon 900EX/LX line. Both of these operations are located in Mumbai and supported by satellite facilities around the country.

The regional service centers are backed up by spares warehouses in Mumbai and Chennai and offshore facilities in Dubai, Singapore and Paris.