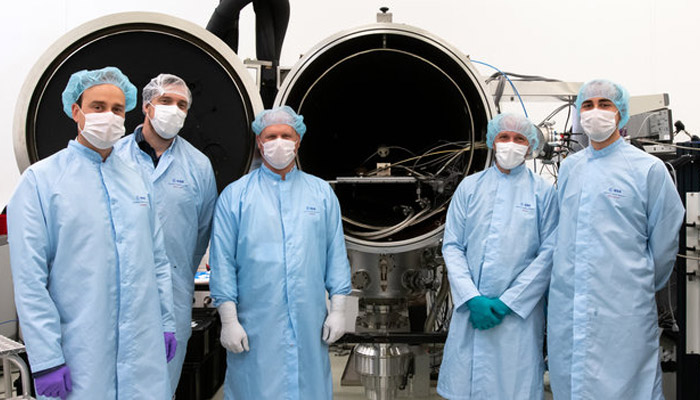 An ambitious instrument for ESA’s ExoMars 2020 mission has passed its testing in conditions resembling those on the Red Planet. It will now be transported to Russia for its acceptance review, followed by integration onto the Kazachok Surface Platform, scheduled for launch this time next year.

At about 8 x 8 x 20 cm plus a trio of antennas, ESA’s Lander Radioscience experiment, or LaRa for short, is a bit bigger than a 1-litre milk carton. But it functions as a high-performing transponder, tasked with maintaining an extremely stable direct radio-frequency link between Earth and Mars for a full martian year – two Earth years – once ExoMars has touched down.

Proposed by the Royal Observatory of Belgium, LaRa has been developed through ESA’s PRODEX programme – focused on developing science experiments for space – and funded by the Belgian Space Policy Office.

The latest testing of LaRa took place in ESA’s Mechanical Systems Laboratory (MSL) at the Agency’s ESTEC technical heart in Noordwijk, the Netherlands. This is a small-scale version of the adjacent ESTEC Test Centre, able to perform a wide range of space-simulating tests, but serving spacecraft instruments, subsystems or mini-satellites rather than full-size missions.

Following vibration testing on one of the MSL shaker to simulate the harsh conditions of launch, atmosphere re-entry, descent and Mars landing, LaRa was then placed inside a thermal vacuum chamber for nearly two weeks to perform functional testing in hot and cold conditions.

It was at first placed in high vacuum to ‘outgas’ fumes that might otherwise pose problems in space and to test its behaviour in conditions similar to that of the voyage to Mars. LaRa was then subjected to simulated martian conditions, with 6 millibars of carbon dioxide added to the chamber, at the same time as the temperature was cycled up and down.

LaRa’s electronic box will be kept warm by the ExoMars lander’s heater. LaRa’s antennas however are installed outside of this thermally controlled environment and will have to endure extreme temperature cycling: nights as cold as -90°C, with daytime reaching up to a relatively comfortable 10°C. The resulting novel antenna design was developed in cooperation between ESA and Université Catholique de Louvain.

At the end of testing the thermal vacuum chamber was opened. Engineers approached the instrument wearing mouth masks, gowns and sterile gloves – resembling a hospital surgical team – then proceeded to remove the sensors and cabling fitted for the testing before placing the instrument and its antennas into sterile bags.

Like all hardware designed for interplanetary missions, LaRa is subject to strict planetary protection protocols to prevent microbial contamination.

“The instrument’s surfaces are regularly swabbed to check its ‘bioburden’ levels remain acceptable,” explains Lieven Thomassen of LaRa prime contractor Antwerp Space. “Its interior, made up of four levels of circuit boards, has already undergone full cleaning. It is all but fully sealed away from the outside world, with only a 2 mm diameter venting hole to avoid over-pressurising  once LaRa reaches space.”

LaRa is one of two ESA instruments on the Russian-built ExoMars Surface Platform. Known as Kazachok – for ‘Little Cossack’ – the platform’s first role is to get itself and the ESA-made Rosalind Franklin ExoMars rover safely down to the Oxia Planum lowlands on Mars. Then, once the rover drives off its ramps, Kazachok will devote itself to running a total of 13 experiment packages aboard. The Surface Platform was developed by NPO Lavochkin under Roscosmos contract, in partnership with ESA.

LaRa will receive an X-band radio signal from Earth that it will then relay back again. By carefully measuring slight Doppler shifts in this two-way signal over time, researchers will be able to identify tiny periodic shifts in the position of the Surface Platform over time, opening up an invaluable view into the Martian interior.

“LaRa will reveal details of the planet’s internal structure, and allow precise measurements of its rotation and orientation,” comments Véronique Dehant of the Royal Observatory Belgium, the instrument’s principal investigator.

“It will also detect variations in angular momentum due to redistribution of masses, such as the seasonal mass transfer in carbon dioxide when part of the atmosphere freezes into ice. Last but not least LaRa will also allow the accurate determining of the precise landing position.”

As a terrestrial analogue, imagine a spinning egg – you can tell just by looking at its wobbled movement whether its inside is liquid or hard-boiled.

But the challenge is maintaining the ultra-stable direct radio link during LaRa’s planned operating schedule of two 1-hour sessions per week, especially when Mars orbits to its maximum 401 million km away from Earth.

“On the Earthly side, we will be using giant 70-m class antennas of NASA’s Deep Space Network or the Russian equivalent at Kalyazin or Bear Lakes, to transmit the X-band radio signal towards Mars and to pick up its delayed replica relayed by LaRa and ‘Doppler-signed’ by Mars – all this with as low as 5 W of radio power generated by LaRa,” explains ESA microwave engineer Václav Valenta, managing the LaRa project.

“But LaRa on Mars will need sufficient sensitivity to detect radio signal as low as few attowatts – trillionths of a watt. When Mars and Earth come closer – at their nearest just 54.6 million km – then Europe’s Estrack ground stations will be able to close the link with LaRa as well.

The scanty Martian atmosphere is a complicating factor. On the plus side its presence enables convection to carry away waste heat. But while it is more than a hundred times thinner than Earth’s air, radio frequency operation within it still leaves a risk of ‘corona’ effects – ionisation of local gases which can lead to interference and potentially harmful lightning-like discharge.

“It has also undergone testing inside ESTEC’s Maxwell chamber for electromagnetic compatibility, to check all its elements work properly together. Moreover, a dedicated shock model of LaRa was developed and tested at the ESTEC Test Centre to verify the robustness of LaRa against mechanical shocks induced by the carrier module separation and heat-shield jettison.” ExoMars Surface Platform

Once testing of LaRa in the MSL was complete the instrument was moved to ESA’s Metrology Laboratory, for precision measurements of its surface flatness. It needs to be precise down to a scale of a few dozen micrometres – thousandths of a millimetre – for optimal fit and thermal contact with its lander interface, helping to maintain a good operational temperature on Mars.

From ESTEC LaRa will be transported to the Space Research Institute of the Russian Academy of Sciences, IKI, for final acceptance testing. It will then be moved to Cannes in France where it will be integrated on the Surface Platform with the rest of the lander and tested at the full-assembly level.

“The opportunity to fly opened up at the end of 2015 and the actual developments towards the flight model started only one year later, so the LaRa team has had to work very hard to come to this point,” adds Václav. ExoMars 2020 is due to be launched by the Russian Proton launcher from Baikonur in Kazakhstan in July 2020.