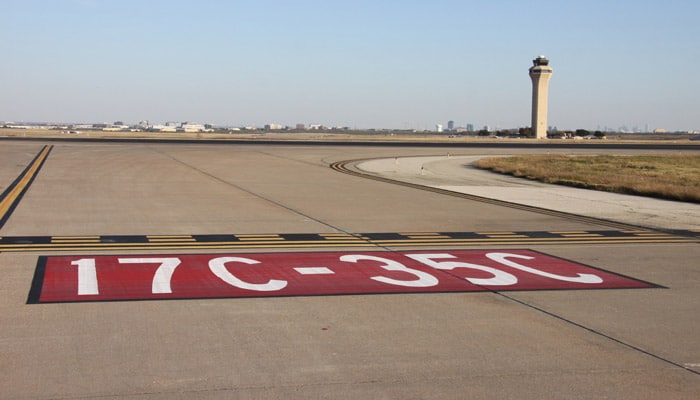 DFW AIRPORT, Texas, Nov. 27, 2017 /PRNewswire-USNewswire/ — Dallas Fort Worth (DFW) International Airport will rebuild and install new technology on one of its busiest runways thanks in large part to federal grant funds. DFW Airport has received two grants for airfield improvement from the Federal Aviation Administration (FAA) totaling over $52 million. The bulk of the Airport Improvement Program (AIP) grants, about $49.5 million, will be used for the refurbishment of Runway 17-Center/35-Center and associated taxiway improvements. $2.6 million will help fund a lighting upgrade for the Terminal ramp areas. 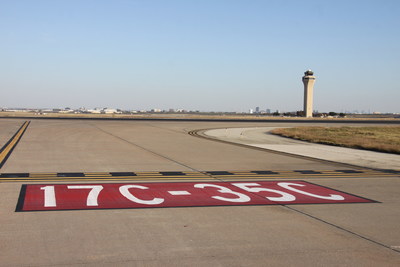 “Next year, we plan to rehabilitate the runway used for more arrivals than any other at DFW, and this grant from the FAA will go a long way toward funding that critical infrastructure need,” said Sean Donohue, chief executive officer at DFW Airport. “We thank our partners at the FAA for supporting DFW through needed infrastructure improvement grants, and we also extend our sincerest gratitude to Congresswoman Eddie Bernice Johnson and Congressman Kenny Marchant for their ongoing support of DFW Airport.”

The rehabilitation project for Runway 17C/35C features the installation of an updated pavement sensor system for measuring weather impacts.

“To remain competitive in an increasingly globalized economy, we need to make sure that our major airports such as DFW have the full backing of its federal partners and stakeholder groups,” said U.S. Congresswoman Eddie Bernice Johnson, (D) Texas 30th District. “As the most senior Texan on the House Transportation and Infrastructure Committee, I will fight to ensure that we continue to make those investments in airports like DFW so that we can stay ahead of the competition and keep America moving.”

“DFW Airport should be considered as the nation’s premier transportation hub and it will only improve with these projects,” said U.S. Congressman Kenny Marchant, (R) Texas 24th District. “I am honored to represent DFW Airport in Congress and look forward to the seeing the impacts these improvements will have on air-travel, trade and job creation in North Texas.”

The rehabilitation project is scheduled to take place in mid-2018. The runway will be closed for about four months, but DFW’s six additional runways will allow a full schedule of flight operations. Customers should not see significant air traffic delays due to the closure.

The rehabilitation consists of replacement of the center third of the runway, about 6000 feet long, 50 feet wide, reaching a depth of more than three feet. The runway is comprised of 12-inches of lime-treated sub-base, 8-inches of cement-treated base and 18-inches of Portland Cement concrete. Afterward, the entire runway will be resurfaced with a composite section of Portland Cement concrete and polymer-modified high performance asphalt, designed for strength, flexibility and weather resistance.

The FAA’s AIP provides grants for the planning and development of public-use airports. For large hub airports such as DFW, the grants could cover up to 75 percent of eligible costs for the specific projects awarded.

As defined in federal regulations, Disadvantaged Business Enterprises will have the opportunity to participate in the performance of contracts and subcontracts financed with the federal funds received. Each year since 2012, the Airport has awarded more than 35 percent of its business contracts to disadvantaged, small, minority and women-owned firms.

About Dallas Fort Worth International Airport:Dallas Fort Worth International (DFW) Airport earned the distinction of the best large airport in North America for customer service in 2016 from Airports Council International. DFW Airport warmly welcomes more than 65 million customers along their journey every year, elevating DFW to a status as one of the most frequently visited superhub airports in the world. DFW Airport customers can choose among 168 domestic and 57 international nonstop destinations worldwide. DFW is elevating the customer experience with modernized facilities and updated amenities, as well as through a $2.7 billion Terminal Renewal and Improvement Program. Centered between its owner cities of Dallas and Fort Worth, Texas, DFW Airport also serves as a major economic generator for the North Texas region, producing over $37 billion in economic impact each year by connecting people through business and leisure travel. For more information, visit the DFW web site.