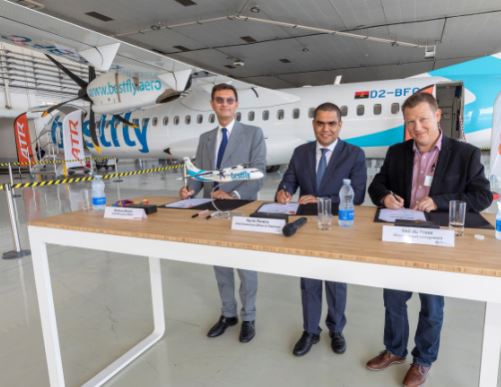 Luanda, Angola/ 5 August 2019 – Nuno Pereira, CEO and Founder of Bestfly, the Angola-based aviation services company, signed for the company’s first two ATR 72-600 regional aircraft at a ceremony held at Toulouse Francazal Airport, France, at ATR headquarters, on Friday 2nd August. The twin-engine, turbo-prop regional airliners, which have been leased from ACIA Aero Capital group, represent a first of this type for Bestfly, as well as being the first ATR-600 series to operate in Angola. Aircraft number one was ferried to Luanda over the weekend, with the second due to arrive by the 10th August.

Complementing the existing Bestfly fleet of fifteen aircraft and two helicopters, the addition of the ATR 72-600s marks an important evolution for the business as it adds corporate shuttle service operations to its existing jet, turbo-prop and rotary charter services. Pereira anticipates the new aircraft will be kept busy supporting corporate charters for the energy sector, private charters for the expanding national business fraternity and will interline with international commercial business class passengers requiring further transport across the vast nation of Angola.

Following completion of the final parts of certification by the Angolan CAA (INAVIC) , the first charter is slated for the beginning of September for a flight from Luanda to Cabinda.  Configured with 72 seats, passengers will benefit from the comfort of travelling in the widest cabin in the regional turbo-prop sector, increased overhead baggage space and newly designed seats offering 30-inch pitch.  The increased comfort, as well as fuel efficiency, and dispatch reliability were all key factors in the selection of this model which delivers competitive operating costs underpinned by reduced fuel burn, which can be up to 40 percent less fuel than the closest competitor aircraft. It is also well suited to the terrain of Angola and West Africa, with the ability to operate on unpaved and short runways. The combined attributes and versatility of the aircraft meet Bestfly’s needs for flexibility in an underserved market.

“We are a customer-centric organization, and we responded to the growing demand for this type of aircraft from our clients. As ATR is one of the world’s leading regional aircraft manufacturers we’re also proud to be doing our part to expand regional connectivity in Angola by basing these aircraft here. This is another first for us, but it certainly won’t be our last. As a leading aviation company in Angola, we serve customers with our offshore helicopters, small to large business jets, and now the ATRs. We are working hard to provide an extremely well-rounded offering to the growing business market here in Angola and further afield,” said Pereira, CEO of Bestfly.

Based at Aeroporto Internacional Quatro de Fevereiro the ATR 72–600s join a fleet containing one Gulfstream G550, a Gulfstream G450, a Bombardier Global Express, Challenger 605, and two Learjet 45s, as well as a Dassault Falcon 900, four King Airs and two Leonardo AW139 helicopters. Bestfly has invested in crew and technical training and is working closely with ATR to support aircraft operations.

Bestfly, consists of a group of companies operating in the Angolan aviation market. Established in November 2009, customer service, high operational standards and a focus on safety are core elements positioning it as a market leader in Angola. The group services include ground handling, aircraft management and charter, and helicopter off-shore services to the oil and gas industry.