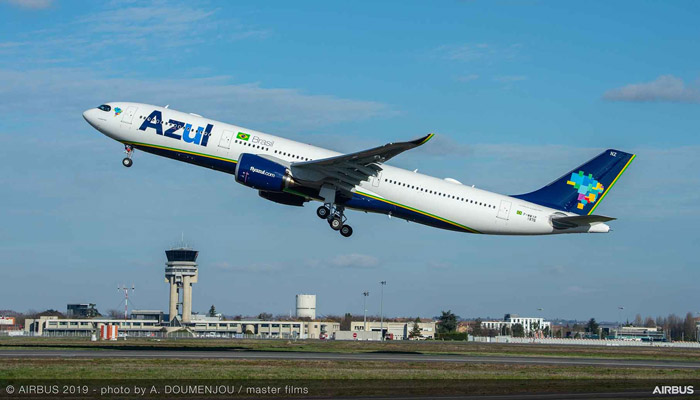 Toulouse, 13 May 2019 – The first A330neo of the Americas has been delivered to Azul Linhas Aéreas on lease from Avolon, becoming the first airline from the Americas to fly the A330-900. The aircraft is the first of 15 A330neo ordered by Avolon.

The A330neo, Airbus’ new generation A330 aircraft, will be used by the airline to expand its international route network between Brazil and Europe and the United States. Fitted with a three-class cabin accommodating 34 business class, 96 economy Xtra and 168 economy class seats, the A330neo offers passengers greater comfort along with the newest and the most advanced in-flight experience while the airline will benefit from the aircraft’s unrivalled operating economics.

“We are very proud to be the first A330neo operator in the Americas. This new aircraft will play a key role in the expansion of our international markets supporting our strategy of having a modern and fuel-efficient fleet”, celebrates John Rodgerson, Azul’s CEO.

“With its many new features and an Airspace cabin, the A330neo can only add to Azul’s many travel awards said Christian Scherer, Airbus Chief Commercial Officer. “Innovation packed, superior passenger comfort and 25% fuel efficiency all rolled in to one – that’s the A330neo.”

The A330neo is the true new-generation aircraft building on the most popular wide body A330’s features and leveraging on A350 XWB technology. Powered by the latest Rolls-Royce Trent 7000 engines, the A330neo provides an unprecedented level of efficiency – with 25% lower fuel burn per seat than previous generation competitors. Equipped with the Airbus Airspace cabin, the A330neo offers a unique passenger experience with more personal space and the latest generation in-flight entertainment system and connectivity.

Founded in 2008, Azul is a Brazilian carrier that serves 108 destinations across South America, the United States and Portugal.

Airbus has sold 1,200 aircraft, has a backlog of nearly 600 and nearly 700 in operation throughout Latin America and the Caribbean, representing a 56 percent market share of the in-service fleet. Since 1994, Airbus has secured nearly 70 percent of net orders in the region.

Airbus is a global leader in aeronautics, space and related services. In 2018 it generated revenues of € 64 billion and employed a workforce of around 134,000. Airbus offers the most comprehensive range of passenger airliners. Airbus is also a European leader providing tanker, combat, transport and mission aircraft, as well as one of the world’s leading space companies. In helicopters, Airbus provides the most efficient civil and military rotorcraft solutions worldwide

Azul named the top airline in Latin America by Kayak

Embraer Delivers its First E195-E2 to AerCap and Azul