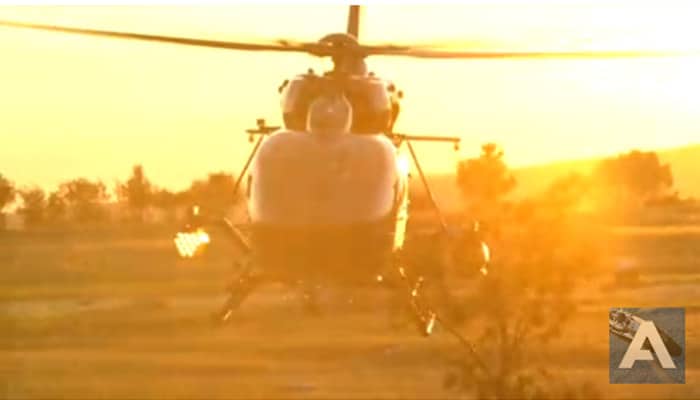 Donauwörth, 9 November 2017 – Airbus Helicopters has recently completed a ballistic development test of an HForce weapon system on a H145M on Pápa Airbase in Hungary. The tested system included guns (FN Herstal HMP400), unguided rockets (Thales FZ231) and cannons (Nexter NC621) as well as an electro-optical targeting system by Wescam (MX15) and a helmet mounted sight display by Thales (Scorpion). All planned and required tests were performed in a tight and demanding time schedule.
“This is an important milestone towards the qualification of HForce on the H145M, which is planned for end 2018”, said Axel Humpert, Head of H145 Programme. “The positive results of this first ballistic development test are the outcome of a very good and professional cooperation between all parties involved, especially with the Hungarian Ministry of Defence.”
Next steps prior to the qualification of HForce on the H145M are the development testing of laser-guided rockets in Sweden before the end of the year as well as additional live-firing trials in summer 2018.
HForce is an innovative, incremental and integrated high performance weapon system that can easily be fitted (“plug and play”) into Airbus Helicopter’s military platforms such as H125M, H145M and H225M for ambitious and smart military operations where flexibility of mission equipment is a vital criterion. It is designed to meet the requirements of defence agencies seeking light attack mission capabilities or a complement to their existing fleet of specialized attack helicopters. Meanwhile, qualification of the core HForce system is on track for end 2017, following an extensive flight-test campaign carried out on a H225M testbed.
The H145M is a proven military helicopter, derived from the H145, a rugged workhorse and best in its class for rough EMS and police missions. First delivery of the H145 took place in 2014. The entire H145 fleet has now clocked up more than 80,000 flight hours. With a maximum take-off weight of 3.7 tonnes the H145M is an agile light attack helicopter. It perfectly matches the needs of Special Forces, can be used for a wide range of tasks, including armed reconnaissance, ground fire support, anti-tank warfare, escort, tactical transport, MEDEVAC and CASEVAC. Customers for the H145M include Germany – which in June received their 15th and final H145M LUH SOF helicopter on time and on budget – as well as the Republic of Serbia and the Kingdom of Thailand.