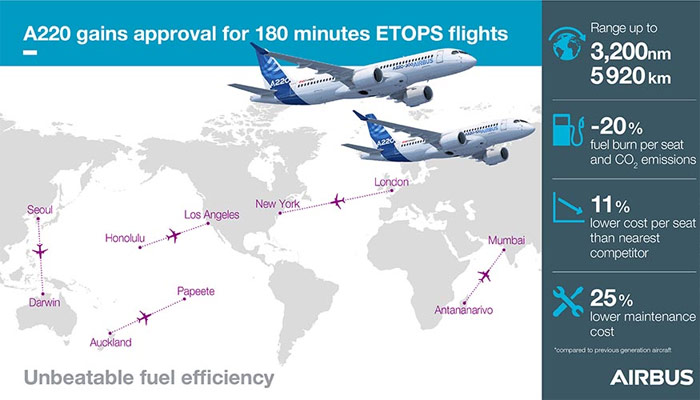 Mirabel, Quebec, January 14, 2019 – The newest addition to the Airbus family of commercial aircraft, the A220, has received 180-minute extended operations (ETOPS*) approval from the Canadian civil aviation authority, Transport Canada. This achievement paves the way for A220 customers to start new direct non-limiting routings over water, remote or underserved regions.

“This A220 ETOPS milestone adds to the numerous performance capabilities which the unbeatable A220 family already offers,” said Florent Massou, Head of Airbus’ A220 Programme.

“Being the only in-production aircraft in its class capable of performing both steep approach and long-range operations, the A220 is definitely unlocking new route opportunities for airlines,” added Rob Dewar, Head of Engineering and Customer Support, A220 Programme.

The A220 is the first commercial airliner to obtain domestic ETOPS certification from Transport Canada. This capability is available as an option for A220-100 and A220-300 operators, enabling them to fly for up to 180-minutes from the nearest diversion airport.

As the only aircraft purpose-built for the 100-150 seat market, the A220 delivers unbeatable fuel efficiency and true widebody comfort in a single-aisle aircraft. The aircraft brings together state-of-the-art aerodynamics, advanced materials and Pratt & Whitney’s latest-generation PW1500G geared turbofan engines to offer at least a 20 percent lower fuel burn per seat compared to previous generation aircraft. With a range of up to 3,200 nautical miles (5,920 km), the A220 offers the performance of larger single aisle aircraft.

“ETOPS” is a set of rules initially introduced by International Civil Aviation Organisation (ICAO) in the mid-1980s to allow commercial operations with twin-engine aircraft on routes beyond 60 minutes flying time from the nearest airport and which were previously operated only by aircraft with more than two engines. These rules, which are now named “EDTO” (Extended Diversion Time Operations) by ICAO have been progressively revised to allow operations up to or beyond 180 minutes diversion time.