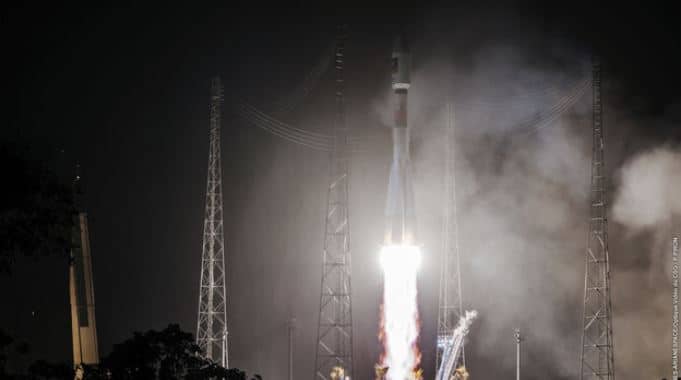 Named for the astronomer who pinpointed Earth’s true position in the Solar System, the Galileo satellite navigation system that will help Europe find its way in the 21st century now has 14 satellites in orbit after today’s double launch.

This seventh Galileo launch went by the book: the first three Soyuz stages placed the satellites safely into low orbit, after which their Fregat upper stage hauled them the rest of the way into their target medium-altitude orbit.

The twin Galileos were deployed into orbit close to 23 522 km altitude, at 3 hours and 48 minutes after liftoff. The coming days will see a careful sequence of orbital fine-tuning to bring them to their final working orbit, followed by a testing phase so that they can join the working constellation later this year. “It was made possible by the fact that European industry’s manufacturing and testing of Galileo satellites has achieved a steady tempo.”

“It is also significant as Galileo’s last flight by Soyuz this year before the first launch using a customised Ariane 5 to carry four rather than two satellites each time – which is set to occur this autumn. “Meanwhile, hard work is proceeding behind the scenes to ensure the worldwide Galileo system, including its far-flung ground stations, is reliable, secure and robust for the start of operational services to users.”

Galileo is Europe’s civil global satellite navigation system. It will allow users worldwide to know their exact position in time and space with great precision and reliability. Once complete, the system will consist of 24 operational satellites and the ground infrastructure for the provision of positioning, navigation and timing services.

The Galileo programme is funded and owned by the EU. The European Commission has the overall responsibility for the programme, managing and overseeing the implementation of all programme activities.

Galileo’s deployment, the design and development of the new generation of systems and the technical development of infrastructure are entrusted to ESA. The definition, development and in-orbit validation phases were carried out by ESA, and co-funded by ESA and the European Commission.

The European Global Navigation Satellite System Agency (GSA) is ensuring the uptake and security of Galileo. Galileo operations and provision of services will be entrusted to the GSA from 2017.

Be the first to comment on "Galileo: 14 satellites in orbit after today’s double launch"